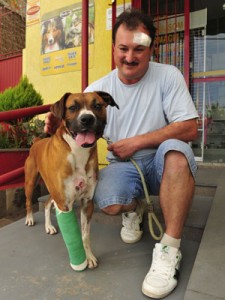 A dog named Max from the city of Garibaldi, Brazil is being hailed as a hero after saving his owner, Osmar Persisco, taking fire from armed robbers in the process.

Persisco had just parked his truck when he and Max were approached by two armed men who demanded that he hand over his keys. When he did not, they shot at him, grazing his forehead. Max saw his owner recoil, noticed blood and decided it was time to step in.

“He saw the blood and was furious,” Persisco said in an interview with the Brazilian newspaper Globo. “He left as a rocket to attack the thieves. One of them ran away, but the other was dominated by Max. To defend himself, the thief shot the dog. Max stopped the assault, and he saved my life.”

The thief ran, but not before shooting Max two times. The dog was struck once in the front leg, and was bleeding heavily from a gunshot wound to the chest.

He was rushed to a local vet. “He had two perforations, one in the chest and another one in the right front leg, but he is expected to recover well,” said veterinarian Ari Glock. “He is already walking, but we did immobilize the wounded leg. Max is a strong, very courageous dog.”

Osmar Persisco says that although the two were already close, the bond between them is even stronger now. “If I didn’t have my dog around, they would have killed me. He’s my hero.”