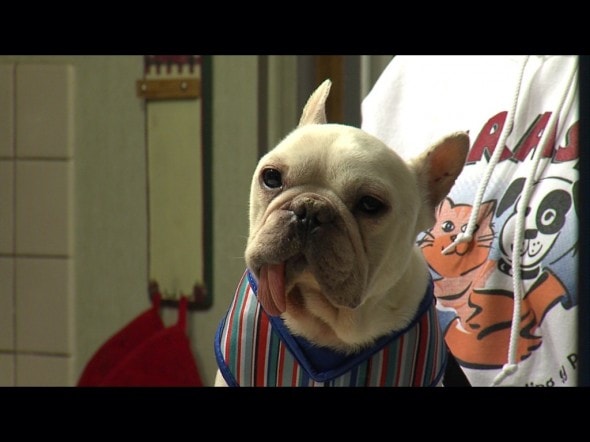 On Sunday evening, employees at a Petco in Pittsford, New York discovered a French bulldog abandoned in the bathroom. The dog was found inside a bag and showed signs of chronic neglect.

When store employees found the dog he was in poor condition. He had vomited and gone to the bathroom in the bag that he had been left in. He was also visibly malnourished. Employees called Greece Residents Assisting Stray Pets (GRASP), who came and took the dog.  “I felt anger that someone would leave this dog in the bathroom unattended in a bag,” said GRASP Intake Coordinator Karla Barkley. “That person did not use the resources that were available to them as far as trying to take him to a shelter or finding a home.”

The shelter has named the dog Pierre. He is estimated to be between four and six years old. Pierre is malnourished, has skin irritations and is struggling to keep his food down. He is currently being fed through IV fluids. The shelter believes he has been neglected for a long time. Despite all the neglect he has been through he is still very affectionate towards people.

He is living in a foster home already with Sue Zukoski and his life has already dramatically improved thanks to her care. “He is just absolutely wonderful,” said Zukoski. “He’s very calm, he’s very loving. He loves attention.” Pierre will take time to recover before he will be ready for adoption. “That’s the number one priority right now. And then once his health is better, we will start the process of finding him a forever home.”

Humane Society investigators visited the Petco on Monday and are looking for Pierre’s owner, who could face criminal charges.