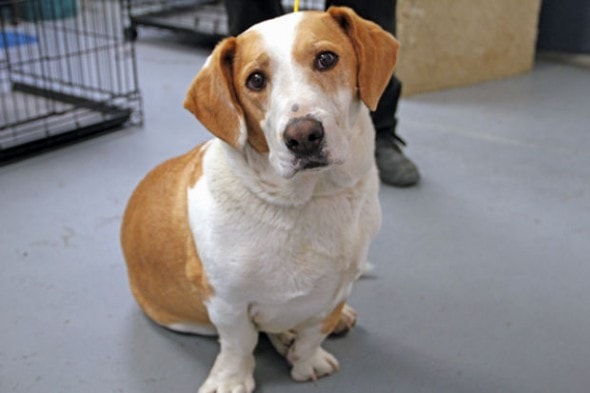 For six years Snakebite lived as a stray in Elko, Nevada. Earlier this month the elusive dog was finally caught and now has a family and home.

Animal control officer Cindy Danielson spent six years tracking Snakebite, a basset hound mix, after he was abandoned outside a motel by his previous owners. Snakebite eluded traps, treats and other traditional methods of being caught. He lived his life near the Elko flagpole along interstate 80, a very unsafe home as Snakebite was spotted on the interstate a few times.

Finally, earlier this month, Snakebite was caught with very little effort. Last winter Snakebite picked up a friend, another stray dog, and on September 10th Danielson received a phone call that the two had shown up at a local school. Danielson was shocked when she arrived at the school.

“When I got there, I saw both of them being petted and I was like, “You have got to be kidding me!’” Danielson said. “Finding them there, ready to be picked up, made me feel kind of foolish.”

Both dogs were incredibly sweet and had no problem letting Danielson put leashes on them. Snakebite was in excellent condition and his companion, a chow chow-border collie mix, was also doing well.

Snakebite soon found a home and his new family not only adopted him, but his friend as well.