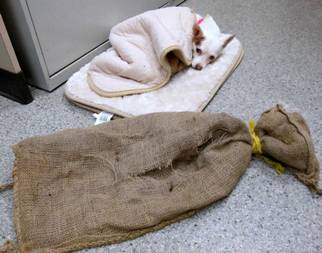 Debra Jordan was on her way to work Monday morning when she spotted a dog sniffing and pawing at a bag. Then the bag started to move. Jordan cut the bag open and found a dirty and cold dog inside.

Jordan brought the dog, who volunteers have named Angel, to the Mary S. Roberts Pet Adoption Center in Riverside, California. “She was really dirty,” said shelter volunteer Carrie Ridgeway. “She had a lot of mud around her ears and she had some fly bites on the tips of her ears. She probably wasn’t cared for. She may have just been kind of in the backyard.” The shelter believes the Chihuahua mix is about 3-years-old. They cleaned her up and fed her. “She’s in really good shape,” Ridgeway said. “She just wants to be on your lap and give you love.”  The shelter is hoping she will be ready for adoption in two weeks.

Jordan, who is a volunteer at the shelter, is very upset about the situation. “It infuriates me, I mean bad enough that you dump them, but to do that to her, it’s just beyond cruel,” she said. “There’s something wrong with that person.” This isn’t Jordan’s first experience with abandoned dogs near her home. She said last year alone she rescued 76 abandoned dogs all within a half-mile of where she lives.

Jordan hopes people will realize that there are alternatives to abandoning unwanted pets. “Animal Control as a last resort is better than dumping them out in the hills, thinking they’re going to survive,” she said. “They starve to death, the coyotes get them, other wild dogs get them, and it’s just cruel to dump them.” The adoption center plans to report the incident to the Riverside County Department of Animal Services.