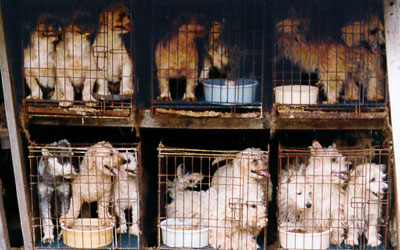 The Ohio bill aiming to get tough on puppy mills is heading to the full House for a vote.  On Tuesday, a legislative committee voted 18-1 in favor of the bill, and the full House vote is expected to take place today.

Substitute Senate Bill 130 was reviewed by the House Agricultural & Natural Resources Committee, who heard witness critiques of the proposed changes.  The suggested $100 fine for each violation has been deemed too low to successfully prevent animal abuse.  There is also a requirement for rescue groups to be licensed and provide registration for foster families.

“This requirement borders on some sort of retaliation from breeders,” said Betty Dellinger of the Coalition to Ban Ohio Dog Auctions.  She commented that there are no similar restrictions for hobby and show breeders, backyard breeders, sporting dog breeders or pet stores.   “If you put these unwarranted restrictions on them, there will unfortunately be more dogs for the community at large to deal with,” she said.

A number of groups, including the Nitro Foundation, the Ohio Coalition of Dog Advocates, the Humane Society of the United States, the American Society for the Prevention of Cruelty to Animals and the CBODA, had additional concerns about the bill.  They strongly urged members to take a closer look at the provisions that said they would:

Bill 130 would strengthen regulations on the care and treatment of animals in high-volume breeding operations.  These “dog retailers” would be differentiated from traditional kennels and would require a license.  While the Humane Society of the United States supports the proposed restrictions, it opted to favor this measure in exchange for keeping an anti-animal cruelty measure off of the 2010 Ohio ballot.

It is more than likely that the House Agriculture and Natural Resources Committee will be voting yes on this bill, and will be reviewed and passed by the Ohio Senate when they return from Thanksgiving vacation.  Citizens are encouraged to call, write and visit their senators to express their concerns about these dog-breeding measures under Substitute Senate Bill 130, specifically to remove language regulating animal rescues for dogs.

This link is one way to reach senators: