Juan Tarquino’s world came crashing down on the night of November 18, 2014, when his dog Piaf, a female black Labrador mix, broke loose from her leash and collar and ran off into the streets. After getting hit by a car, the pet fled and got lost. The dog’s whereabouts were unknown for five months, but on April 7, 2015, Piaf and Tarquino met once again. Their reunion was unbelievably emotional.

Tarquino is a Colombian national currently living in Buenos Aires, Argentina. He adopted Piaf when she was 2-months-old, and when he relocated to Argentina, he took his best friend with.

Since the night of the accident, the pet owner slept and ate very little. He was consumed by the thought of finding his beloved dog. The pet owner plastered “Lost Dog” flyers all over Buenos Aires, offered a reward, started a social media campaign on Facebook, Instagram and his personal blog, and even took to radio talk shows to ask the community for help in finding his dog.

Thousands of people liked and followed his Facebook page (Buscamos a Piaf/Searching for Piaf) and hundreds volunteered to help him post the flyers and walk the city streets searching for the dog. His new found friends and search team received hundreds of possible sightings. Tarquino acted on each of them and met many street dogs believed to be Piaf, yet none of them were. In the process to bring Piaf home, the pet owner helped many of the street dogs he met. 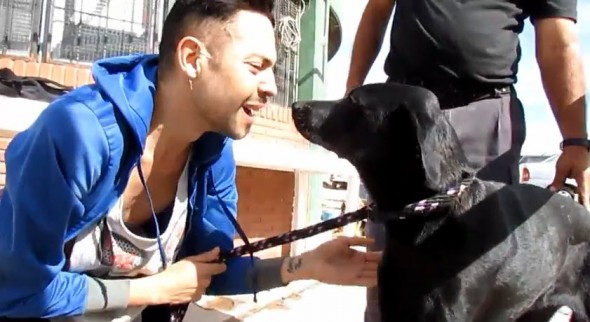 This April Tarquino and a search volunteer decided to post flyers in a different part of the city, near Roca Park, but their car broke down before arriving at their destination. The search team had to abandon their plan and post fliers instead in the area where the car broke down. It seemed destiny had planned this because this unlucky event is led Tarquinao to reunite with Piaf.

A few days after the incident, a security guard from a construction project near Roca Park saw one of the fliers and contacted the pet owner. The man said a black dog matching Piaf’s description had showed up at their parking lot two months before, and ever since he and other workers had been feeding the dog. The security guard believed the dog was Piaf because after seeing the flier, he called her by her name and the dog seemed to respond.

On April 7th, Tarquino and a friend, Mónica Blanco, set out to the construction project to verify the black dog was Piaf. They found a friendly pet with an injured leg. The dog did not recognize Tarquino as her owner and wouldn’t allow him to get too close, but she seemed in overall good health and happy to “meet” Tarquino again.

The security guard was the only able to get close to the dog, Tarquino asked him to check for a little lump on the dog’s belly. The rescuer said the dog in fact had something there and this news gave the pet owner hope. Still unsure of the pet’s true identity, Tarquino got close to the dog and begged her to let him see inside her mouth. The pet owner was looking for a specific dark spot (birth mark) on the dog’s tongue that would positively ID her.

When Tarquino saw the mark, he broke down in tears. He couldn’t believe he had finally found his dog. Five months had passed and every day he hoped would be the day he would find his pet. While still kneeling on the floor, the tearful pet owner grabbed the dog rescuer’s arm and sobbed while thanking him for caring and loving his dog.

Because Piaf seemed very scared, Tarquino took her home to decompress before taking her to a vet. The dog ate and slept most of the time and the next day she was taken to the vet. Aside from being under weight, the veterinarian found a fracture on her leg, however this seems to be healing on its own but improperly and x-rays and other tests are needed to determine if corrective surgery is required.

Tarquino says he can’t believe Piaf is back, but now that his life is complete once again the pet owner wants to help other pets in need. Every seventh day of each month, Tarquino, Piaf, and anyone else who wants to join will take to the streets to feed, cure and rescue street animals. The thankful man has no idea how he will fund his newly found rescue mission dreams, but in honor of all those who helped him find his dog, he now wants to help others.

Below you can see the emotional reunion video. It is 8 min. long and in Spanish, but you don’t need to be fluent in Spanish to understand happiness and tears of joy. Enjoy!