The Colorado Animal Rescue doesn’t discriminate when it comes to what animals they take in.  So one could figure that with everything from dogs to chickens and goats coming to them, they have seen it all.  Then one day Ernie came in, and has become a recovery story for the ages.

“He was found in the town of Glenwood Springs,” said Tracey Yajko of the Colorado Animal Rescue. “He was just full of personality.”

When Ernie came to them he had no use of his back legs.  Veterinarians did many tests trying to figure what was going on with him, but never could really nail it down.

“It was kind of a big puzzle,” Yajko said. “We had X-rays done and it didn’t look like any slipped discs.”

Without a single clue as to what was wrong with Ernie, staff resorted to things like therapy, acupuncture and of course, lots of TLC.  They built a wheelchair for him, and he spent much of his time up in the front office.  No one gave up on him.

Susi Cooley caught wind of Ernie’s story after he became somewhat of a celebrity thanks to the rescue’s Facebook page.  After checking him out, she thought she might like to adopt the little guy.

“I called the shelter the next day and I said, ‘you know, I’m going on vacation and I’ll be gone for a whole week, but I don’t want to hinder him finding a really good home.  If by chance, he’s still there, I’d like to send in an application,'” Cooley explained.

So she went on vacation and Ernie hung out at the rescue, and the idea was Cooley would be picking him up on her way home.  A few days into the week, something no one could have dreamed of happened.

“I heard some screaming up front and everybody came to the front office,” Yajko said. “It was literally a miracle.”

“It was amazing because we were prepared to always have a dog that was in a wheelchair,” Cooley said. “We were okay with that.”

Today, Ernie lives the life of a happy, healthy and whole dog.  He loves being part of his new family, and doing all sorts of fun stuff.

“We go out on a paddle boat a lot — he loves to be my captain,” Cooley said. “We go in a kayak, he rides in the back of my motorcycle.  We even go jogging and camping together.” 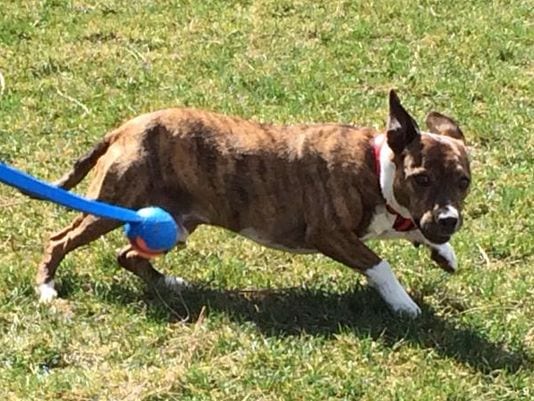