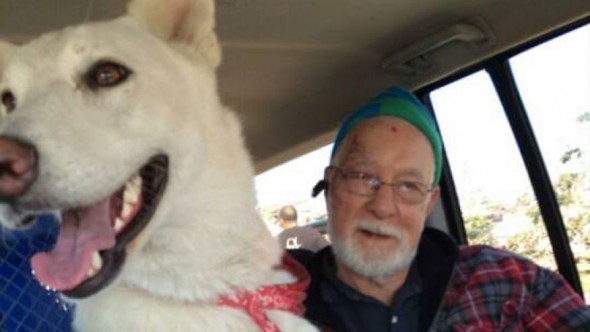 When the storms hit Illinois last week and homes were destroyed, Clem Schultz’s life was changed forever.  Not only did he lose his home, his dog was missing and his wife was killed in the storm.  However, this past Saturday, Clem got a ray of sunshine when someone spotted his dog and she was reunited with him.

An electric utility worker was in a bucket lift that Saturday, taking a look at the damage in the immediate area.  He spotted Missy wandering among the debris, and notified the police straight away.

According to Tyler Rowan, Clem’s grandson, Missy proved a tough dog to catch.  Se evaded everyone for about 2.5 miles, still frightened from the storm.  They were finally able to catch up with her and calm her down.  Tyler said that since getting her back, his grandfather hasn’t let Missy go.

On a Facebook page set up in an effort to help find Missy, the family posted, “We are all happy she is home!”

There were a total of eight tornadoes that ripped across Illinois.  Fairdale was hit by the strongest of them, which is the same one that took Clem’s house and wife.  Many volunteers have come from neighboring areas and states to help out, but many family members still missing, both furry and not.

A new Facebook page called the Fairdale and Rochelle, Illinois Pet Recovery is set up to help people find their pets, and get pets they find back to the families that are missing them.  To see the page, you can click here.