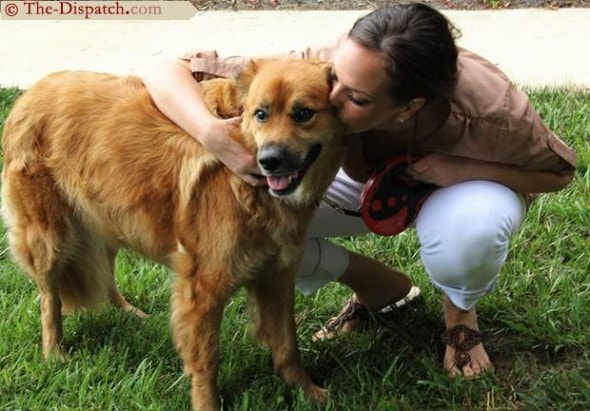 For 53 days Kimberly Watts never gave up hope and searched tirelessly for her missing dog Harley. Last Thursday her hard work paid off when she and Harley were reunited.

Watts first met Harley when she fostered him from the Humane Society in Charlotte. She originally had planned to only foster him for a few weeks but she quickly bonded with the golden retriever/shepherd mix and Harley became a permanent part of her life.

On April 28th Harley, along with another family dog, slipped through a garage door. The other dog returned, but Harley didn’t.

“We think he got into a blind panic with the storm and ran,” said Watts.

Watts was devastated, but determined to do everything to bring Harley home. She passed out fliers, posted signs and created a Facebook page. She set up feeding stations wherever there had been sightings of Harley

Throughout the days of searching many people joined in on the search for Harley and gave guidance to Watts. There were many sightings of Harley throughout the 53 days, but Harley was skittish around people he didn’t know.

Finally last Thursday Penny Camp located Harley and instead of trying to call to the skittish dog called Watts. Ann Watts, Kimberly’s mom, was able to get there right away and Harley was relieved to finally see someone he knew.

“When he saw my mom, he howled, danced and jumped,” said Watts. “He was so happy.”

Harley was about 10 pounds lighter and had some ticks, but was otherwise doing well. Watts offered Camp a $250 reward for finding Harley, but Camp declined.