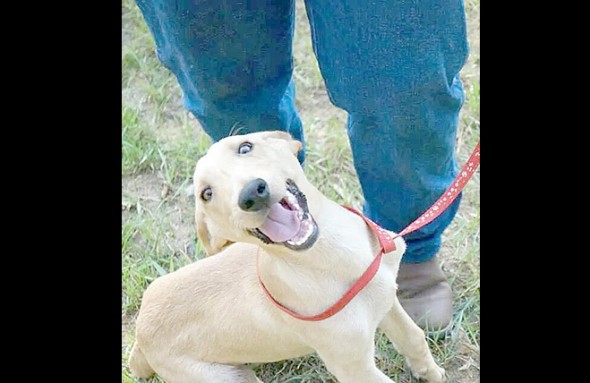 When Duke was brought into the Jasper Animal Shelter, it was figured that he was simply not savable.  Covered in fleas and mange and having a broken leg, Duke was in very bad shape, but something told the staff at the shelter not to give up on this sad little guy.

Vet David Cain had taken a look at Duke’s broken leg, and was surprised to see it was healing on its own, and didn’t require much assistance from medical professionals.  Doctor Cain immediately started a regiment to treat the mange and fleas.

Duke was on the mend, but overcrowding in shelters soon became an issue for the Jasper Animal Shelter.  He had been at the shelter for quite some time, but there were no potential adopters coming forward to bring him in.  The shelter took to Facebook to find a potential family, but nothing.

In Pinawa, Manitoba, Canada almost 1,500 miles from where Duke was being housed, Myles and Leslee Drynan had signed into Facebook to catch up with family members.  When they got online and saw the photos of Duke at the shelter, it was love at first site.  They had to adopt him.

“This puppy was too happy a soul to be extinguished,” wrote Myles.

The Drynans called Leslee’s cousin who lives near the shelter.  Within the hour, the cousin was at the shelter adopting Duke.  Duke was then flown to Minneapolis, Minnesota, where the Drynans drove out ten hours to pick him up and bring him to his new home in Canada.

Duke, now renamed Dude, loves his new family.  He has two golden retriever and dachshund siblings and even made a return trip to the Jasper Animal Shelter to thank all of the people that made this rescue and adoption possible.