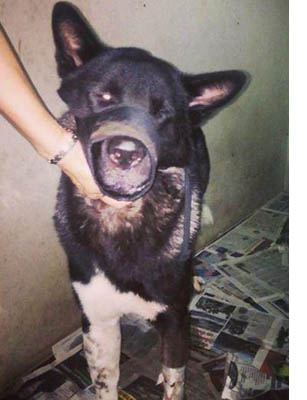 In El Salvador, Hachi, a four-year-old Akita dog, survived a gunshot to the mouth defending his owner in an armed robbery.

“I was coming back from the bank when suddenly two men approached me demanding cash. Hachi lunged towards the man holding a gun and the thief shot my dog,” said the pet owner.

After the thieves took off, the dog owner rushed his brave friend to a local animal clinic and the heroic dog underwent emergency surgery.

According to veterinarians, the bullet went through the dog’s upper, left lip and caused multiple fractures. The canine bled profusely and veterinarians weren’t sure the dog would survive, but after three days of intensive care, Hachi regained strength and pulled through.

The pet owner said he named his dog Hachi after watching the famous movie “Hachi: A Dog’s Tale.”

“I never imagined that four years after watching the movie and getting my dog, [Hachi] would save my life and become my hero,” said the pet owner.

Veterinarians expect the canine to make a full recovery.