On Sunday, October 12, 2014, Spartacus a Pit bull from the Hyde Park area in South L.A. required surgery to close up multiple stab wounds. More than 1,000 stitches were done to patch up the sweet dog.

Los Angeles Police Department reported the stabbing took place near 10th Avenue and West Florence Avenue on October 11th. An unnamed man and neighbor of the pet owner, was originally believed to have attacked the pet without any reason or provocation. The man had previously threatened to hurt the dog and authorities said the individual stabbed the pet and used a shovel to hit the canine over the head. 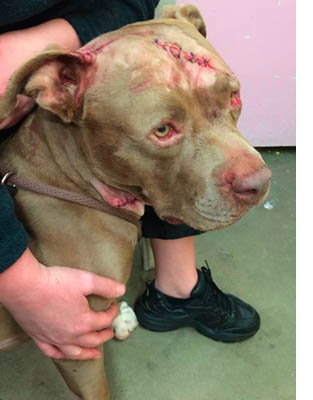 On October 13th, Police released a statement saying that after speaking with various independent witnesses they believed the attack was an act of self defense instead of animal cruelty.

Ghetto Rescue FFoundation (GRFF) learned Spartacus was injured and rushed him to a veterinarian clinic.

It is a miracle that Spartacus did not suffer any internal injuries or broken bones.

“He is the sweetest dog in the world. He came up bleeding and torn up, but he never did anything but wag his tail once he realized he was safe,” said Kyrklund. “He wants you to love him, he wants you to pet him, but there are so few spots you can do that.”

Veterinarians expect Spartacus to make a full recovery, for now he is under the care of GRFF in protective temporary foster.

Even though the police investigation findings suggest the dog’s injuries were not maliciously caused, GRFF continues to care for the dog and believe he is a victim.

As a response to the latest police statement, GRFF posted the following on their Facebook wall:
“Although GRFF remains an ardent supporter of Spartacus, believing him to be the docile family pet with whom we have interacted, we thank the LAPD for their time and dedication related to this incident. We urge our supporters to allow LAPD to conduct their investigation until its conclusion.”

To learn more about Spartacus and how you can help, visit http://www.ghettorescueffoundation.org.