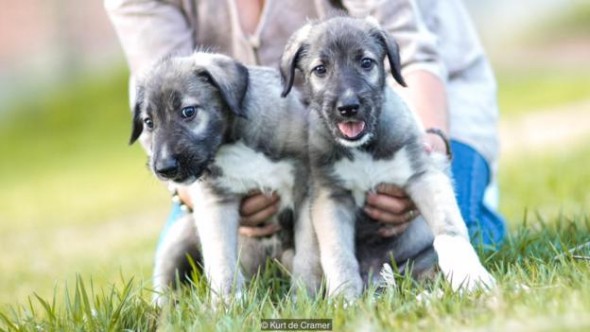 Human beings giving birth to twins in nothing new.  Heck, there’s even a species of armadillo that can do it, too.  However, this is very rare in other mammals, especially dogs.  Recently, a vet in South Africa was performing a Caesarean (C-section) section on a dog, and delivered the first known pair of identical dog twins.

Dr. Kurt de Cramer from South Africa’s Rant en Dal Animal Hospital in Mogale City performs an estimated 900 C-sections a year, so the day started out like any other for him.  He was doing one on a female Irish wolfhound that was having difficulties giving birth.  Once he started, he could tell right away something was going to be a bit different about this one.

Dr. de Cramer noticed that the wolfhound had a strange bulging by her uterus.  At first, he thought that it might just be some excess fluids surrounding a puppy fetus.  He started the process of extracting the puppy, and that’s when he knew something really, really weird was going on.

What he found after making the incision was super rare.  There was not one, but two puppies!  Both attached to the same placenta via their own umbilical cords.  Real, live twin puppies were born.

“When I realized that the puppies were of the same gender and that they had very similar markings, I also immediately suspected that they might be identical twins having originated from the splitting of an embryo,” said de Cramer.

In 26 years of doing this, Dr. de Cramer has NEVER seen anything like this before.  As soon as the rest of the puppies were delivered, he contacted some other specialists, and had blood samples taken from the pups at about two weeks old.  After testing was done, it was confirmed that they were in fact identical twins.