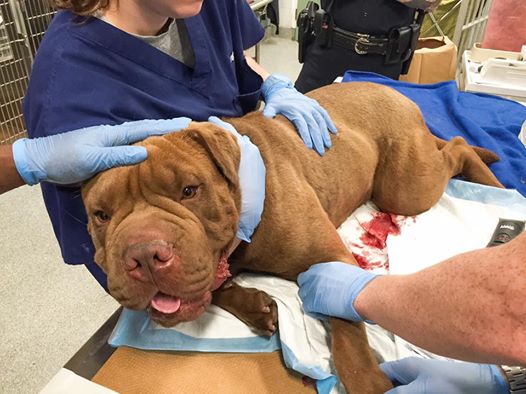 Two Boston police officers have paid medical bills for a dog that was shot while protecting her owner, who was also shot.  They arrived to the scene of the shooting to find 18-year-old Dashaye Mizhari and his dog Felony badly wounded.  After making sure Mizhari was sent off to the hospital, the officers drove Felony to an animal hospital, and paid for the medical bills, too.

According to a report from the police, Felony jumped in front of Mizhari when the shooting started.  He was loaded into an ambulance by EMS, and was taken off to the hospital for treatment.  That’s when the officers turned their attention to Felony.  They loaded her into a police cruiser and took her to Angell Animal Medical Center.

While there, the police found out that there was simply going to be no way to for Mizhari to cover the emergency medical bills.  The cost was over $1,500 and there was just no way he could swing it.  Officers David Lanteigne, Brian Smith and Sgt. Tommy Brooks didn’t want to stand by and let this poor guy lose his dog, so they all chipped in and paid for Felony’s surgery.

Poor Felony is not yet out of the woods.  There’s still a lot of on-going care that she will need for a full recovery, and it isn’t going to be cheap.  Lilly the Hero Pit Bull Fund has set up a charity fund for Felony to help out with these bills.  As both Felony and Mizhari recover, they will need all the help they can get.  Please, if you can, consider clicking here to make a donation.  Every little bit helps, and we know that we have some of the best and most generous readers out there that we can count on, so thank you in advance.