Don the sheepdog is from London.  He made headlines recently after deciding that he’d watched his human operate the tractor enough, and it was time to take matters into his own paws.  He hopped behind the wheel, and went down a hill in it and onto a highway, giving motorist quite a scare.

It happened this past Wednesday near Abington, Scotland.  Farmer Tom Hamilton had to exit the work vehicle that he was using to inspect some farm animals, and that’s when Don decided this whole tractor thing looks pretty easy.  Hey, if his human can handle it, so can he, right?

Hamilton insists that the parking brake was ON and functioning.  Well, it apparently wasn’t engaged enough.  Don took the tractor through a fence, down a bit of an embankment and across the M47.  He didn’t hit any other vehicles, but did finally come to rest on the safety barrier.

As one would be apt to, witnesses said they actually thought that the dog was driving.  This started an almost instant viral video and many posts to popular social media outlets across the world.

Don wasn’t arrested for his joyride, and as of the writing of this article, no charges are being filed against Don or his human.  We’d be willing to bet that next time Mr. Hamilton decides to exit his tractor while working, he’ll be double checking that parking brake, and taking Don along with him. 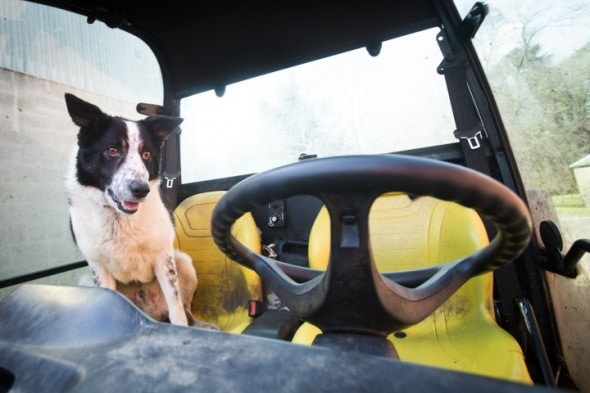