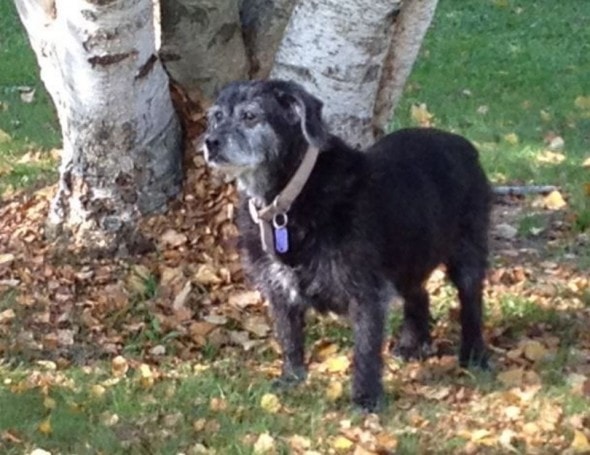 Anyone that has ever rescued a dog knows the level of appreciation they can show for it.  However, for some rescue dogs, things are not very easy.  Some are just poorly socialized, other traumatized to the point where being within ten feet of a human can cause the most horrific fear responses.

For Joyce, rescue may have got her off of the streets, but she was so traumatized, little hope was held out for her making a full recovery.  Julie Mack, writer for MLive.com, shares Joyce’s story, and how she went from neurotic rescue dog, to fully functioning member of a forever family.  To see the original story, click here.

In a family of quirky personalities, easily the most neurotic member of our household has long been our dog.

She came to us in the fall of 2000, a rescue pup of undetermined age (between 2 and 4 years old, was the estimate), undetermined heritage (appeared to be a labrador-terrier mix) and undetermined history.  How she ended up in foster care, we never knew.

She came with a leash, a wire crate and a name: Joyce.

It turned out she also came with a high-strung personality offset by a sweet nature and an eagerness to please.

While she bonded quickly with the kids — then ages 12, 11 and 8 — she was definitely a nervous-Nellie type.  We learned quickly not to scold her: Her response to “bad dog!” was to immediately pee on the spot.  She hated loud noises — the vacuum cleaner, thunderstorms, fireworks.

She viewed strange adults with great suspicion.  In those early years, we never had to guess when the newspaper was delivered because Joyce would go berserk that a stranger had the nerve to approach our house.

But for all the barking, she was — as my husband put it — a sissy bully.  She fit the description of all bark and no bite.

Her passiveness in that regard made her the perfect foil for our children.  While we had a cat openly disdainful of rambunctious children, Joyce was a willing recipient of childish affection, however aggressive.

My feelings about Joyce were more ambivalent.  Joyce couldn’t be left alone for too long, and she needed to be let out at frequent intervals.  Although she was technically housebroken, the toileting accidents were too numerous to count.  She ate anything and everything, but sometimes threw up it up.  She shed constantly, leaving a trail of black fur balls.

She was hard on the house, ruining one couch by constantly rubbing against it, and so often soiled our first-floor beige carpeting that we finally replaced it with wood laminate floors. In her early years, she liked to chew things, and she had a particular appetite for Barbie dolls, which led to some dramatic showdowns between a sorrowful, repentant Joyce and an enraged 8-year-old girl.

But for all my impatience with the dog, I could see that she meant well, and she was unabashed in her love and loyalty. When I arrived home, she would greet me at the door.  She followed me around the house.  At a time when I was surrounded by rebellious adolescents, Joyce was the one household member who instantly obeyed me.  When her presence would become too annoying, all I had to do was say, “Joyce! Crate!” and the dog would slink to her crate and stay there.  Unlike my human charges, there was never any lip.

I also grew to appreciate how Joyce’s love for walks improved my own qualify of life.  It was an excuse to get outside, get some exercise, chat up the neighbors.  It was especially lovely when my husband or son or one of the girls came along, a chance for a leisurely chat while the dog romped in our neighborhood park, her favorite place in the world.

In recent years, old age began to take its toll on Joyce, who became a case study in doggie geriatrics.  She went deaf. She had cataracts.  She smelled of moldy socks.  Her hips were bad — she could no longer jump on a couch or climb stairs.  She had recurrent skin problems that caused patches of fur to fall off. She developed doggie dementia, constantly scratching at the floor as if to dig for a bone.

My husband, the dog’s primary caretaker in the past few years, was resistant for months to discussions about putting the dog down.  He clung to flickers of the old Joyce, including the night a few months ago when we heard Joyce barking in the middle of the night.  In the morning, we discovered someone had broken into the house next door and stolen a car.  Had the person tried our house first, only to be deterred by a barking dog? It seemed likely.

But Joyce was undeniably fading.  When the younger daughter stopped home last weekend and gave the dog a hug, Joyce yelped in pain.

Two days later, we took Joyce to the vet.  The vet said it was time to let her go.  My husband said he was ready.  As we stood there, Joyce went quickly and peacefully.