Dog goes missing in the wild for two months 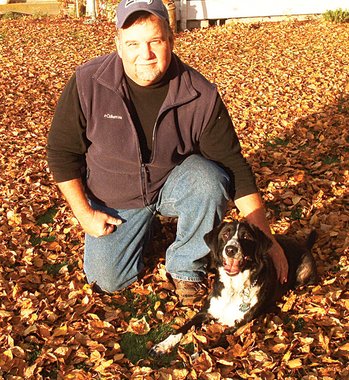 Dennis Brown’s friend Ron Holtrop had gone hiking in June with Dennis’ dog Charlie and his own dog Indy near their home in Lynden, Washington.  While on the hike both dogs had gone off exploring. Indy returned but seven-year-old Charlie didn’t. Holtrop searched for three hours trying to find Charlie until finally he broke the news to his friend that Charlie was missing.

Dennis joined Holtrop and searched for several more hours. Soon co-workers and friends helped with the search. The Browns put up posters and posted a notice on craigslist about their missing dog.  Dennis’ wife Lori even put Charlie on Facebook to help with the search. Over a month went by and there was no sign of Charlie.

In late July the Browns received a voice mail from Ben Smith. He was working on a project in Maple Falls, Washington which involved him putting an elk camera up in a tree. He believed the camera had pictures of Charlie on it. Dennis went to Maple Falls and left dog toys, food, and a shirt by the camera for Charlie. They knew Charlie was nearby, and she continued to show up in pictures on the camera. On August 6th and 7th Charlie didn’t show up in the pictures and the Browns became concerned.

When the hikers got back to town they happened to mention the dog at a grocery store in Maple Falls and were told to contact a local woman who helps animals named Sage Skeels. Coincidentally Sage happened to walk into the store at that time. Sage and the hikers headed back to where they’d seen Charlie. Using steak, Sage was able to bribe Charlie to safety.

Lori Brown was shopping the next day when she received an e-mail from Sage with a picture of Charlie and she immediately started screaming. “When Lori showed me the picture I started crying like a baby,” Dennis said. The Browns met up with Sage and Charlie in Maple Falls and were thrilled to be reunited. Charlie had lost about a third of her body weight but had no other medical issues. Lori and Dennis are thankful for all those who helped in Charlie’s journey home, “We can’t say anything more than ‘thanks’ to all the many people who helped us bring Charlie back home.  We’re not Charlie’s owners, we’re family!”