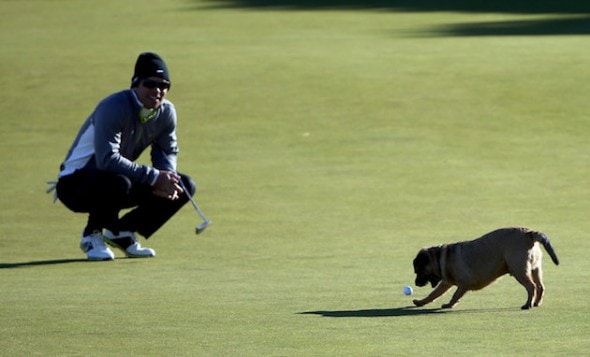 As professional golfer Paul Casey lined up a 20-foot putt for eagle on the 12th green at the Alfred Dunhill Links Championship in Scotland on Friday an unexpected hazard occurred. As Casey prepared for his putt a dog named Digby ran onto the green snatching Casey’s ball up.

Casey took the incident in good fun and even tried to point the dog towards the hole.  The dog had other ideas though and ran off with the ball. A fan was able to catch the dog at the 13th tee and returned the ball to Casey. After being inspected by an official Casey was permitted to play his original ball.

“It’s the weirdest thing I’ve seen on a golf course,” Casey said. “I noticed the dog on the 12th tee and he sort of followed us down the fairway before taking a real liking to my golf ball.” Casey went onto birdie the hole and at the end of the hole tossed the ball back to Digby.