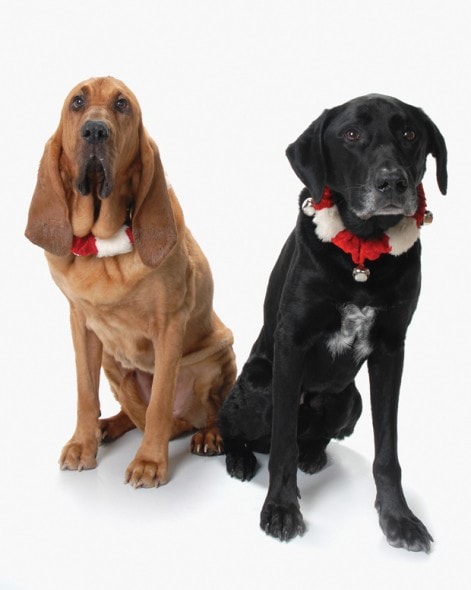 Griffin was helping dog trainer Maureen Fielding track a lost bloodhound named Ellie Mae in Vancouver when Griffin went missing himself. Both Ellie Mae and Griffin are now home for the holidays.

Ellie Mae went missing on December 3rd after a tree fell and spooked her. Maureen Fielding and her dog Griffin were searching for Ellie Mae when Griffin went missing too. Ellie Mae was found last Thursday after missing for 10 days. Griffin was still missing though. Fielding along with hundreds of local volunteers searched the area for Griffin.

Griffin was moving and searchers would find occasional clues that Griffin had been there. “For a couple of days I was about an hour behind him but he kept moving, which makes it difficult,” said Fielding. “It took me several days to figure out his pattern.” Finally on Tuesday night Griffin timidly appeared in the backyard of the home of someone who Fielding has taught dog tracking to.

Fielding is very grateful to have Griffin home for Christmas and for all those who helped her search for him. Fielding has also learned a lot from the experience. Griffin will stay on leash during tracking missions and she will now be advocating dog collar GPS units. Most importantly she wants other pet owners who lose their dogs to know, “Be persistent, determined and active in getting our pet back. You can’t give up hope.”