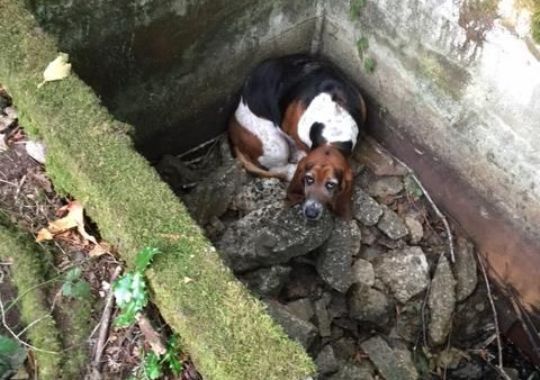 Two dogs, Tillie and Phoebe, are best friends.  When the pair went missing, Vashon Island Pet Protectors helped start a search.  Phoebe had gotten stuck in a cistern, and while waiting for rescue, Tillie stood guard by her bestie the entire week, making sure she wasn’t alone.

Vashon Island Pet Protectors (VIPP) posted some pictures of the pair on their Facebook page.  It was hoped that someone had seen them, and would be able to point volunteers in the right direction.

VIPP got a call on Monday that when someone went out onto their property, this “reddish brown” dog would come over to them.  Then, the dog would walk back into the woods upon approach.

Volunteers made their way into he woods on the property. After getting down into a ravine, they heard the sound they had been waiting for.  A simple, one bark response when someone called out, “Tillie!”

When volunteers came upon the scene, they only saw Tillie.  She was lying down next to a very old cistern.

“They knew that meant Phoebe was inside the cistern and every breath was held and every doggie prayer offered that the peek over the rim would somehow find her safe,” said Amy Carey of VIPP.  “We have a happy ending with dear Phoebe found perched on some concrete rubble that held her out of the water.  For nearly a week Tillie stayed by her side with the exception of the few minutes of each day when she went for help.”

Both Tillie and Phoebe were very hungry and a bit cold, but both are safe and sound once again at home.  Carey said this is a prime example of how strong a dog’s bond can be with the people and other animals they love.

“Hope is an awfully hard thing to keep open and alive in the face of heartbreak, but it so important for happy endings for missing pets,  or even for unhappy endings with closure,” she said.  “My message to most people with missing dogs is that unless the dog is being seen periodically, it is likely stuck somewhere and that when stuck, even the most loyal and people-oriented dogs won’t make a sound – even to an owner calling from a few feet away.  That’s where the amazing Miss Tillie steps in as the heroine of this story.  Not sure Phoebe would have ever been found without her as they were miles from the last place spotted.” 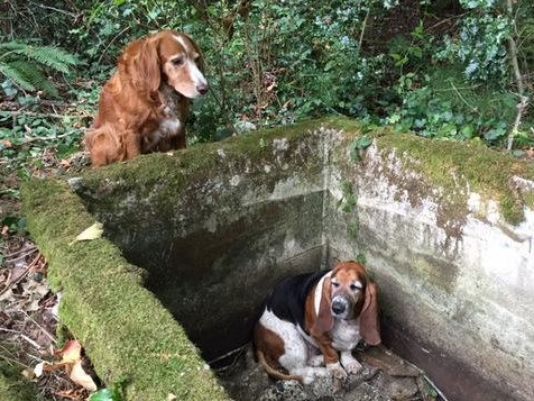