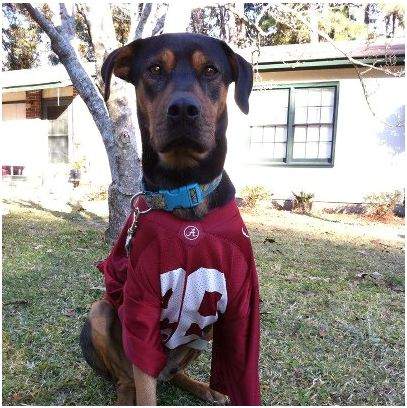 On Sunday morning Ann Warner’s rescue dog Jake woke her up and wouldn’t leave her alone until she went outside with him. Once outside, Jake led Warner to a truck that had flipped over several times and landed into the woods.  Jake then helped police find the driver of the truck.

It was around 6 a.m. on Sunday morning when Jake heard a car wreck. Warner was sound asleep when Jake woke her up and wouldn’t leave her alone until she took him outside. When Warner came outside with Jake he led her to the accident scene in the woods. Warne quickly ran back to her house and dialed 911.

Jake wasn’t done helping when police arrived on the scene. “Jake could smell the man in the woods,” said Warner. “Police arrived and with Jake’s help found him.” The man was in shock and having a panic attack when he was found. He was taken to a nearby hospital where he is recovering from the accident thanks to Jake’s help.