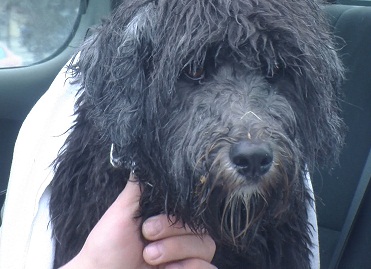 When a woman in Nebraska fell into a freezing lake trying to save her dog two men came to her rescue. They wouldn’t have been able to rescue her without the help of her dog Sparky, who played a critical part in the rescue effort.

Raymond Frana and Steve Dye were at Holmes Lake to do a monthly inspection of the dam as part of their job with the Army Corps of Engineers. While there they spotted a woman splashing in the freezing lake.

The woman had gone out on the ice after her dog Sparky had fallen through.

“She went out to save him and she actually busted through the ice,’ said Frana.

Although there were fishermen at the lake, none of them were close enough to hear her yell for help. By the time Frana and Dye reached the woman Sparky had managed to get himself out of the water and the woman was struggling as hypothermia began to set in.

The men had a rope with them, but it wasn’t quite long enough. That’s where Sparky helped make the rescue possible.

“We put the rope under his collar, and she called to the dog and he got the roper to her,” said Frana, who then lay on the ice and pulled her to safety.

The two men then put the woman in the truck and got her help. Although without the two men the woman wouldn’t have made it, they see the real hero as Sparky.

“If it wasn’t for this dog, that lady would have went under,” said Frana.