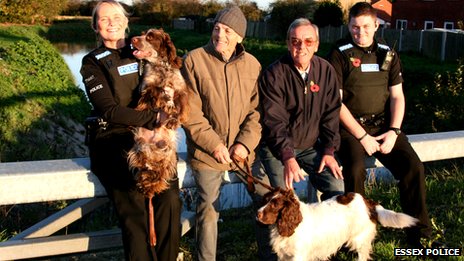 Michael Dabbs was walking his two dogs, Ben and Smudge, Friday evening when Ben fell into the freezing river. The 63-year-old man tried to help Ben, but ended up getting stuck in the river himself. After spending over two hours trapped in the freezing water Smudge was able to get help and saved Dabbs and Ben.

Dabbs and his two springer spaniels were going for a walk in Grays, Essex, England when he ended up in a life-threatening situation. “The trouble started when Ben fell into the river and couldn’t get out. I went after him and found I couldn’t get out,” said Dabbs. “I didn’t realize at the time just how serious it was.” Dabbs and Ben were stuck in the freezing cold water while Smudge waited and tried to get them help.

Tony Paxton was walking across a bridge that goes over the river when Smudge came running in obvious distress. “Because he had a lead on I was fearful that its owner might be in trouble. Then I heard Mr. Dabbs’ weak calls for help,” said Paxton. Dabbs had been in the water for over two hours and was at serious risk of freezing to death. The road Paxton was walking on is quiet and Dabbs is lucky that Paxton happened to be walking by and that Smudge had been waiting to alert the first person he saw.

Paxton called for help and officers arrived to save Dabbs. Officers found Dabbs at the bottom of an 8 foot high sloping bank where he was clinging onto Ben. The officers nearly lost their own footing on the steep slope but were able to successfully pull Dabbs and Ben to safety. Dabbs was clearly suffering from hypothermia and the officers quickly wrapped him in their coats and the survival foil the carry with them. When paramedics arrived Dabbs temperature had dropped well below normal body temperature. He thankfully recovered quickly, only spending about six hours in the hospital.

Dabbs is thankful for all his rescuers, “I am extremely grateful to everyone involved and reckon the police officers did a really good job. Smudge did a good job too. He could have run off but springers are clever dogs.”  The officers are glad they were able to save Dabbs and are impressed with Smudge’s actions. “He’s my little hero!” said rescuing officer Karen Pownall.