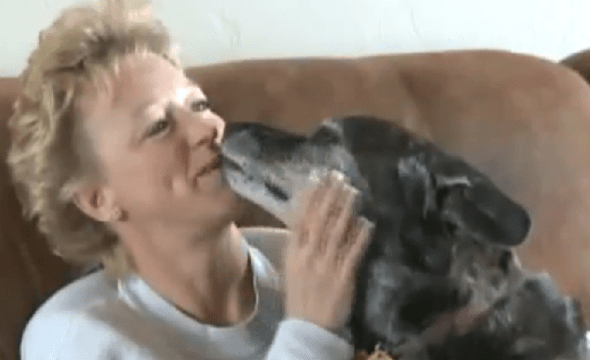 A Montrose, Colorado woman is crediting her dog Tiger with saving her life this past weekend. Patty Jensen and Tiger were out for a walk along the Uncompahgre River when she began having her seizure. Tiger immediately sprang into action taking care of Patty until help arrived.

Saturday is usually Tiger’s day off. For 11 years Tiger has been by Patty’s side. When she got him as a puppy she trained him to be her service dog as she has a history of seizures. “Saturday is always the day that I give my dog a rest because he’s my service dog,” said Jensen. “So I try to do something special with him just one on one.”

This past Saturday that special one on one time was a peaceful walk along the Uncompahgre River. Unfortunately that peaceful time off quickly turned when Jensen started having a seizure. Before she became unconscious Jensen was able to dial 911, however she was unable to tell them where she was or even who she was.

Meanwhile Tiger immediately went into action to help his owner. “He will warn me and then when I’m having them, he’ll normally lay over top of me and lick my face to bring me out of it,” Jensen explained. First responders tracked the GPS on her phone and as soon as they got close Tiger ran to get them and lead them to Jensen.

Jensen is doing well thanks to Tiger and the first responders. The day was just a reminder of how important Tiger is to her life. She says without him she wouldn’t be able to go out at all and would be confined to her home. Thanks to Tiger she can live a more normal life.