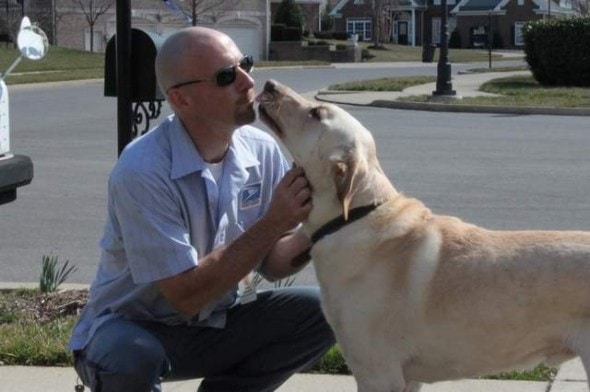 Kory Cantrell is used to being chased and barked at by dogs as a mail carrier, but while delivering mail the other day Cantrell heard a dog in distress. Without hesitation he went to find the dog. What he found was a 110-pound yellow lab named Wyatt stuck on a fence after he had tried to jump it. Two neighbors were desperately trying to lift Wyatt off the fence, but were unable to without Cantrell’s help.

Cantrell was on his route in Indian Lake, Tennessee when he first heard Wyatt yelping in distress. Without a thought Cantrell went into action. He found Wyatt hanging from a decorative aluminum fence. With Wyatt were his owner Sibyl Reagan and their neighbor Scottie Hughes. The two were trying to free Wyatt, but were unable to lift him. “He tried to jump over the fence, but he didn’t make it,” Reagan said. “He got caught on the fence through his back leg at the hip.”

Unable to lift Wyatt on their own Reagan and Hughes knew they needed help. “We started yelling for help and here comes the mailman running down the driveway to get the dog off the fence. Scottie and I would have never been able to lift him by ourselves.” With Cantrell’s help they were able to successfully free Wyatt from the fence.

Reagan is thankful for the help from Cantrell and Hughes, “He didn’t have to do that, my friend certainly didn’t have to do that, and yet they both did. They are definitely my heroes.”  The acts of Good Samaritans didn’t stop there. Reagan was getting Wyatt ready to go to the veterinarian when three girls who were out running stopped and helped her get Wyatt into the car. “That’s pretty remarkable for them to come and get covered in blood for an animal they didn’t know,” said Reagan.

Wyatt is recovering well from his ordeal. When taken to the veterinarian he was rushed into emergency surgery. “Luckily, it didn’t hit any bones or any major arteries – it just went through the back leg muscle,” Reagan said. Wyatt is physically healing very well, though Reagan says he won’t go near their fence now. Even so as an extra precaution she’s having special tubing placed across the top of her fence.

Reagan made sure to track down Cantrell’s name so she could properly thank the man who saved her dog. “Had things not ended up the way they did, I would have lost (Wyatt).”