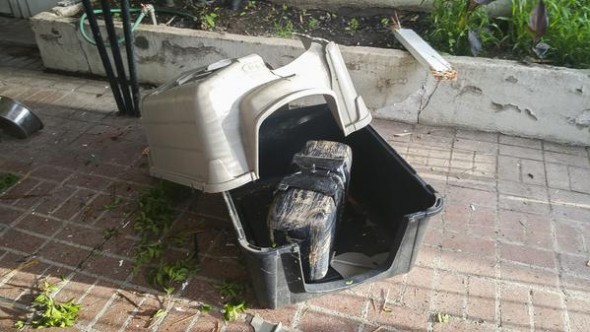 A family from Arizona was home when an awful crash came from just outside the house.  Upon inspection, they found that somehow, large bricks of marijuana seemed to have dropped from above onto their carport and a dog crate that was outside.  No one was hurt, but all were very surprised.

Maya Donnelly and family were still in bed when the early morning weed bombing happened.  The family thought that maybe it was a storm passing by with some thunder rolling.  They couldn’t have been farther from what really happened.

When Donnelly went outside to inspect what had happened, there was no rain on the ground to speak of.  What was there was a 28 pound brick of the illegal drug, a big hole in the roof of their carport, and a crushed dog crate.

“I looked up to see the hole, and then my eyes trailed down and the big dog’s house was destroyed.  It made a hole in that hard plastic doghouse, and the bundle was inside,” Donnelly said.

Donnelly said that the family’s close proximity to the Mexican border is what lead her to believe that the “bricks” in question were containing drugs.  The local police department said that it most likely came from a pilot in an ultralight aircraft, flying over.  It was most likely an accident according to them.

“We have seen bundles of marijuana being carried by ultralight aircraft weighing several hundred or a thousand pounds,” he told CNN.

Thankfully, no one was hurt, and the family dog was safely inside the home at the time this happened.  Talk about a strange way to start a day!