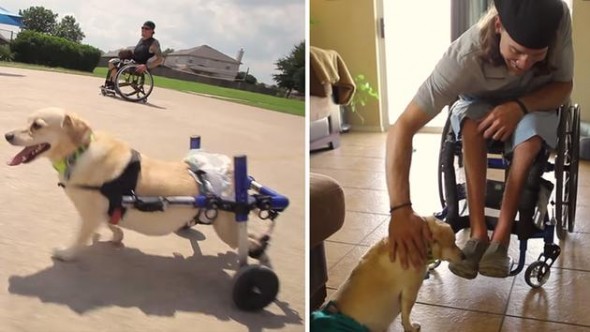 One could say that Michael (human) and Chance (dog) are two of a kind.  After being hit by a car and left on the side of a road for dead, Chance cannot get around without the help of his wheelchair.  This is a challenge that Michael is all too familiar with, being in a wheelchair himself.

After Chance’s accident, he nearly was euthanized.  Getting a good home for a dog that is wheelchair bound is no easy task, and many would have seen it as an act of mercy.  However, the good folks at San Antonio Pets Alive stepped in and saved Chance’s life.

After recovering from his injuries as much as he could, Chance was given a wheelchair to assist with his mobility.  At that point, the difficult task of finding that special forever home that would be capable of helping Chance with any obstacles he may face.  This is where Michael and his wife came in.

“I knew his struggles as well as mine and I knew that we could overcome those obstacles together,” said Michael.  “When he’s in his chair and we’re running together down the street, we feel free.  It’s easy for us to relate.”

Michael says that he and Chance are two of a kind.  A pair of kindred spirits, in wheelchairs, and ready to help each other take on the world.  Even Kleenex, a paper products company, has taken notice of the special bond between the two.

Kleenex decided to do a documentary-style commercial featuring the two.  On their Facebook page, Kleenex said, “A man finds companionship in a dog that faces the same struggles as he does. By giving him a chance, the two overcome life’s obstacles together.”

Yes, Michael and Chance are quite the pair.  Even though they both face tough obstacles together daily, they both seem to benefit from each other.  Sometimes, knowing that you don’t have to face these difficulties on your own is enough to reduce the stress that can come along with it.