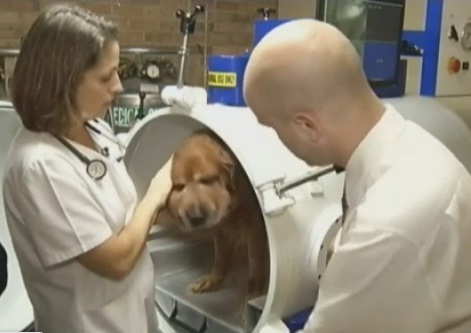 Jacksonville received its first hyperbaric chamber Thursday, and not a moment too soon.  A golden retriever called Nettington was bitten by a Water Moccasin and was given the oxygen therapy just after its installation at the St. Francis Animal Hospital.

Thirteen-year-old Nettington was bitten on Monday, and by Tuesday his face had ballooned to double its normal size.

“That afternoon, I noticed his muzzle was swollen and that something was wrong,” said Claudio Lopez, Nettington’s owner.  “I’m not ashamed to say I actually broke down yesterday when I first saw him this way, because I didn’t expect it.  I knew he was going to be swollen, but when I saw it yesterday, it was a shock.”

Lopez then took his puffy-faced dog to St. Francis.

“When we first saw him, we started treating him with some intravenous fluids and started him on antibiotics and pain medication, started to monitor his blood parameters,” St. Francis Animal Hospital founder Susan Shelton said.

When the hyperbaric chamber was installed Thursday, Nettington got first dibs on it.  Hyperbaric oxygen therapy (HBOT) delivers 100% oxygen at a level higher than atmospheric pressure.  The concentrated oxygen is administered to damaged cells and tissue.

“This chamber that you’re talking about is supposed to be doing wonders, and I never heard of it, and so I’m anxious to see how the results are going to be,” said Lopez.

Each treatment is about $125, but St. Francis strives to provide affordable care for animals since it is non-profit.  A kind-hearted woman having her cat treated that day donated the money to cover Nettington’s treatment.