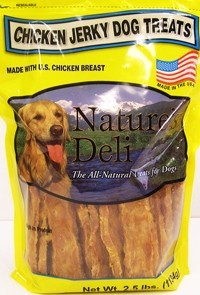 The FDA has issued a warning against feeding dogs the Nature’s Deli Chicken Jerky treats after 34 out of 72 samples taken by the Colorado Department of Agriculture tested positive for Salmonella.  These snacks were sold at Costco stores in the Denver area.

Kasel Associates of Denver has recalled several of their other products this year, but did not voluntarily recall these treats.  Costco has pulled all of these treats with lot code BESTBY061913DEN.

The FDA says that this recall is not in connection with the string of illnesses and deaths linked to other chicken jerky strips, which are primarily Chinese-manufactured.  Kasel Associates makes, packages and distributes their products in the US.

Salmonella in dogs can cause fever, shock, lethargy, dehydration, decreased appetite, stomach pain, nausea, vomiting and diarrhea.  Salmonella can also be spread to humans, so be sure to wash hands thoroughly after disposing of these treats.  Humans and animals displaying these symptoms should seek immediate medical attention.  Serious complications can manifest if left untreated.

Other treats that have been recently recalled due to possible Salmonella contamination:

Complaints about pet treats can be issued to: