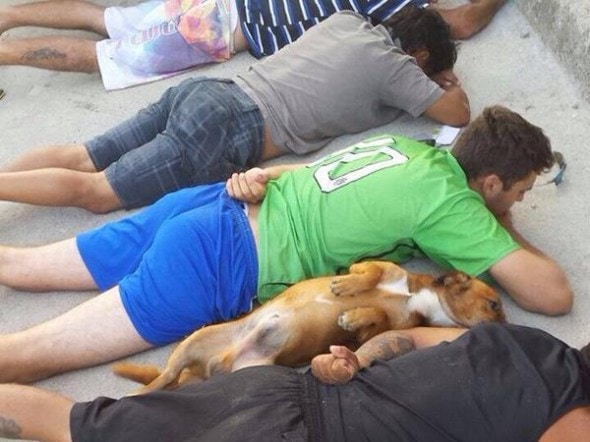 During a police raid on a home in Florianpolis, Brazil a dog that was on the premises did something a bit unusual.  When all of the suspects were ordered to the ground by the police, the dog got down on the ground to be arrested with his “fellow gang members.”

Piloto is the name of the dog in the photo.  Here you can see him on the ground alongside one of the men.  He then rolled over on to his back in a submissive gesture.

Once news of the arrests and the photo of the dog hit local and international news sources and social networking sites all over the internet, it went viral very quickly.

Officer Teily Fabio with the Santa Catarina police told news outlets that at first the dog was barking.  Then when they ordered the suspects to the ground, the dog followed suit and pretty much refused to move.

“We tried to make him leave, but he didn’t want to,” he said.

According to animal psychiatrist and dog trainer Barnie Rico, the dog was showing submission to the officers when they issued the command.

“By exposing its soft underbelly to any potential attacker, it is showing that it doesn’t mean any trouble,” said Rico.