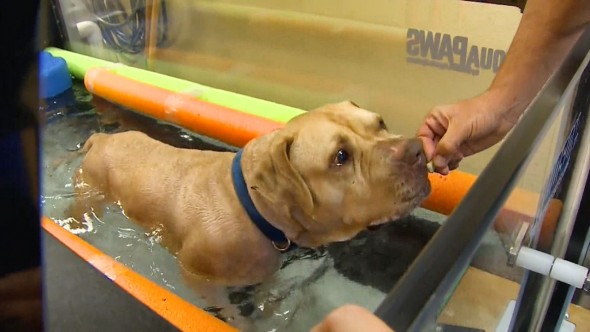 Saint is a rescue dog, found this past October.  He was found in terrible physical condition. And was even paralyzed in his hind legs.  Today Saint is making great strides towards recovery, and it’s all thanks to some high-tech physical therapy and care.  Not only is he getting that care, but the doctor treating him is refusing payment for helping Saint out.

For whatever reason, someone had shot Saint, and he was left tied to a tree for dead.  He’d been left with no food or water, and at the time, no one was positive how long he had been out there on his own.

Someone was eventually charged in the case, and since the rescue Saint is really doing well.  Thanks to his new family, and his new doctors, he is learning to walk all over again.  Using what amounts to an underwater treadmill, Saint may one day walk again. 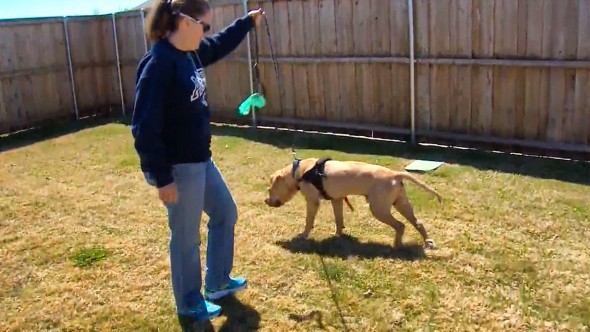 The specialized hydrotherapy is a relatively new technology, but it’s been used to great results in hit’s short history, and Saint seems to be taking to it very well.  He can only take a few short steps at a time.  However, it’s steps that before the hydrotherapy might not have been possible at all.

Saint does his hydrotherapy, for free, at the Veterinary Referral and Emergency Hospital in South Arlington, Texas.  The 24-hour clinic is state-of-the-art when it comes to therapy and treatment for animals of all kinds.  The animal hospital also has canine physical therapist Steven Hooker on staff, and he had wanted to work with Saint from the moment he heard about him.

As luck would have it, Saint was brought in by his foster-turned-permanent human dad Alan Brown for treatment.  Hooker overheard him talking with someone else, and knew it was meant to be.  He would finally get to meet Saint. 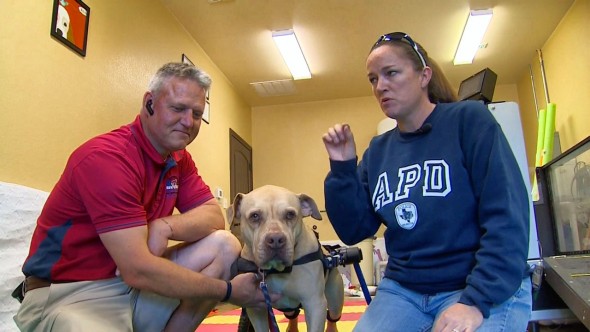 Hooker has refused payment of any kind for helping Saint.  The months of usually very expensive physical therapy costs a great deal, but Hooker insists he is simply “paying it foreword” so to speak.

“If you do something for a dog like him, it’s worthwhile,” he said. 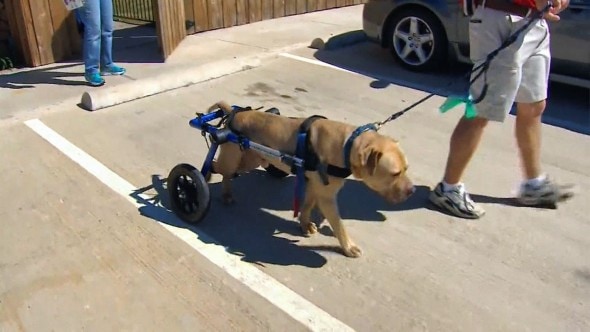 Saint’s humans wanted to do something to thank everyone at the animal hospital for all of the love and care that Saint has been given.  He really is doing so much better than anyone could have expected, and they couldn’t be happier for him.  Recently, Mr. Brown set up a GoFundMe page, but the donations are not for Saint.  They are to be given to the hospital, in thanks for everything they’ve done.

If you would like more information, or wish to donate, click here to be taken to the donation page. 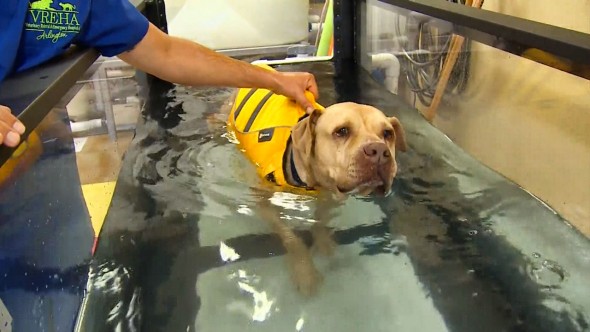