Katie Krupp is used to seeing stray dogs hanging about in the abandoned buildings of Detroit’s east side.  However, for Katie and a white pit bull called Juno, this past Monday would be a day to remember.

She could clearly see the white dog against the burned out backdrop of what used to be a home.  The dog was in the attic of the building, and looked to be unable to get down.

The structure of the building was questionable at best.  Katie called in the Detroit Pit Crew Dog Rescue for help, and local news station WXYZ was there as well. 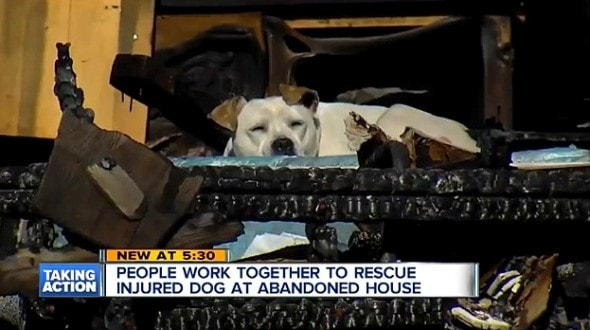 Detroit Pit Crew Dog Rescue showed up with their director, Theresa Sumpter.  The rescue was anything but easy, and at one point, it looked as if the dog was going to try to jump from the roof and into the waiting arms of one of the rescue crew.

After about 45 minutes, the rescue was done.  Everyone, the dog included, made it out of the burned out home safely.  That’s when Katie and the dog now called Juno met for the first time.

Katie told WXYZ that she is already in love with Juno, and is going to do whatever she has to in an effort to adopt her.

“Juno is doing great now — she is currently at an animal hospital receiving care,” said Sumpter.  It is unknown just how long Juno had to spend living in the house she was found in.

If you are at all interested in assisting the Detroit Pit Crew Dog Rescue, you can click here to see their main page, and click here to see their Facebook page.  Any donations are greatly appreciated, and help them continue their great work in a part of the United States hit hard by recession, and has many dogs left abandoned and with nowhere to go. 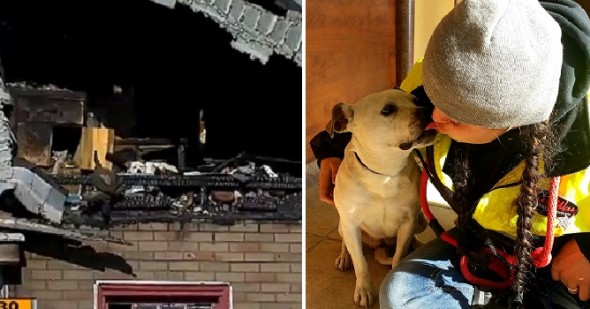