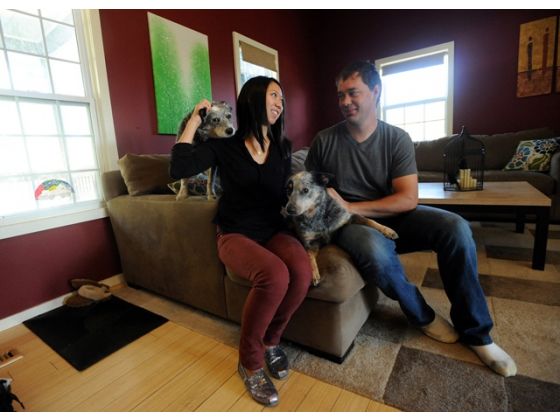 Luna, an Australian cattle dog, escaped out of her family’s yard on Mother’s Day this year. It took four months and the help of craigslist before she was reunited with her family again. Her owner’s whistle is what made her feel home again.

On Mother’s Day, Luna escaped through the white picket fence leaving her Colorado home. A neighbor noticed Luna wandering and tried to get her back home, but Luna ran away. Julia and Bruno Furrer placed an ad for their lost dog. A few days later they received a call from a woman in Perry Park, about 12 miles north of their Palmer Lake home. The woman had called animal control to help catch Luna, but once again Luna ran off. The Furrer’s followed the lead hoping Luna would still be in the area, “We went there a few times a day and searched and searched,” Julia said.

The Furrers continued to search for Luna, filing a lost dog report with the Humane Society and placing an ad on craigslist. The search started to slow though as the summer went on.  On Labor Day they finally got another lead on Luna.

The Furrers received a phone call from the Humane Society that another craigslist ad had been placed for a found dog in the Perry Park area. The ad had been placed by Victor Wilcox and Shelley Tailer. They had spotted Luna near a vacant farm. “We saw her at the side of the road,” Wilcox said. “She kind of looked hungry. She was very thin and it was really hot out.” When Wilcox tried to approach Luna she did her routine of running away, but this time she ran into the barn.

Wilcox placed the ad on craigslist and within an hour received responses linking the lost dog with Luna and the Furrers. Upon hearing the news, the Furrers headed up to the barn and met Wilcox. They had found their dog, but Luna looked at the Furrers as if they were strangers. She turned and walked away from them. The Furrers spent two days coming back over and over to the barn to try to get their dog back. “Bruno and Julia never gave up,” Wilcox said. “They were so patient to try to get her back and make sure she knew who they were. It had to be heartbreaking for them.”

Finally on their sixth trip to the barn, Bruno whistled his distinctive whistle and all of the sudden Luna snapped out of it. Luna ran straight to Bruno. She was “crying and yipping the whole way,” said Julia. Luna jumped into Bruno’s arms and began licking his face. Luna happily returned home with the Furrers. She was welcomed home by the family’s other cattle dog, Zoe, and the Furrers two young twin girls. She had lost 15 pounds on her journey, but has already put back 10 of them.