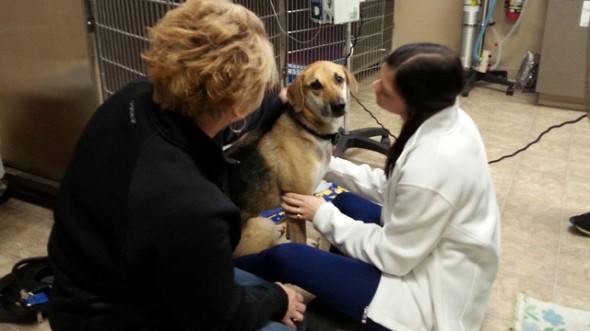 A massive pileup on 1-94 Sunday involving multiple vehicles threw a dog named Kirra from her car. Frightened, Kirra ran away from the wreckage and was missing for nearly 24 hours before being found and reunited with her owner.

In Racine County, Wisconsin nearly 60 crashes were reported on Sunday, including a large multiple-vehicle collision on I-94. Valorie Nyenhuis and her dog Kirra were involved in the crash. They were visiting Nyenhuis parents and were trying to head home before the snow storm became too bad.

“We got on the interstate from Highway 20. People started slamming on their brakes. I got hit by a semi and I think two other cars,” said Nyehuis.

After the chaos Nyenhuis realized Kirra was gone.

“I immediately started looking for her and she wasn’t there,” said Nyehuis. “I don’t know if she got thrown from the car or if she jumped.”

Nyehuis had to be taken to a hospital to be treated for a concussion, but all she could think about the whole time was her missing dog.

Nyehuis’ husband started walking along the interstate and asked people who were stopped whether they had seen Kirra. Soon word was spreading about Kirra’s disappearance and friends and strangers began posting on social media about her.

There was still no sign of Kirra Sunday night and then Monday morning Nyehuis received the phone call she had been hoping for. A Racine County Sheriff’s deputy spotted Kirra around 10:30 a.m.  Kirra was rushed to a veterinarian where she was treated for dehydration and some cuts on her paws.  After being treated she was finally reunited with her family.