On July 6, 2014, Grand Rapids, Mich., was hit by an EF-1 tornado and the devastating twister destroyed homes and anything in its path, including a dog boarding facility. A the time of the disaster, employees were able to relocate 60-70 dogs to a nearby building, but in the relocation Puckett, an eight-year-old Lab/Border collie mix who got spooked and ran away. 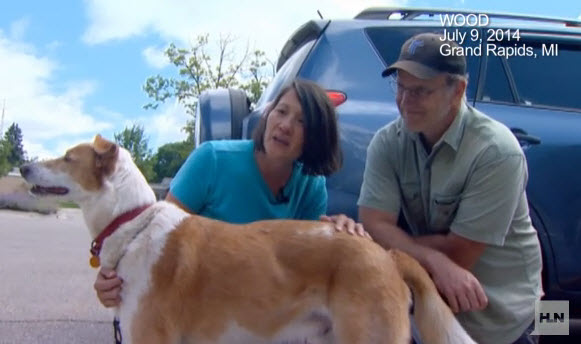 The run-away dog was out in the devastation for two and a half days. His owners were saddened with the news of their lost dog, but they found relieve in knowing that many community members were helping to locate and capture Puckett. The canine was seen in the area, but he was so scared that he avoided everyone.

On July 9, 2014, Puckett was finally captured by a Kent county employee and brought to a shelter. There, his owners arrived to pick him up.

The reunion was an emotional one and since Puckett had not been microchipped his owners took this opportunity to microchip him. Now, if the Lab/Border collie mixgets lost again, the chip will help him find his way home.