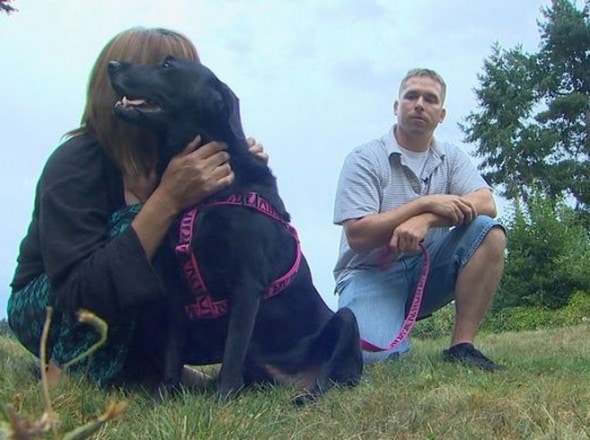 On August 18th, there was an explosion at a Motel 6 in Bremerton, Washington.  While Stephen and Satomi Rapczak were out having dinner, their dog Tiffany was back at the motel room when the explosion happened.  Tiffany was nowhere to be seen, and the frantic search was on.

Most of the other patrons of the Motel 6 were evacuated before the natural gas explosion occurred.  Only one person was injured in the blast, but in the aftermath, no one knew where Tiffany was.

After seeing the devastation the natural gas explosion left, the Rapczaks were in a panic, and fearing the worst.  That’s when they met Julie Saavedra.

Saavedra knows all too much about what it’s like to lose a dog.  It’s one of the main reason that she and a few other local ladies have started a group that searches for lost dogs, free of charge.

“I lost a dog a long time ago and there was nobody to help me,” said Saavedra.

It was a full court press effort from Saavedra and her friends.  They put flyers up allover town, and got the message out on several forms of social media.  The Facebook post alone hit over 3,000 shares!

“Anytime there was a sighting we would hop in our car,” said Saavedra.

It would seem that the fifth time was the charm here. On the fifth sighting call, someone said they saw Tiffany roaming around the marina, not far from he Motel 6 that had exploded.  She was collected and brought back to her family, who couldn’t be happier to be complete again.

“This is her normal self, tail-wagging, usually a really friendly dog,” said Mr. Rapczak.