On May 30, 2015, a five-year-old black dog named Prince from the Humble, Texas, area got lost from his home due to heavy rain storms that spooked him and sent him running. The dog was trapped in the wilderness during two days. He had no food or water and thanks to a woman riding her horse in the area, Prince was found, rescued and reunited with his worried owner.

Darolyn Butler owns Cypress Trails Equestrian Center and was out riding horses with a group of enthusiasts near Carter Park. On their way to the trail, Butler heard a dog barking in the distance, and an hour later when the group of horse riders headed back to the equestrian center, Butler heard the dog bark again. 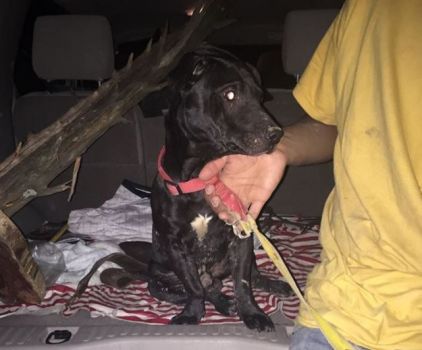 “I thought it was strange a dog was barking that long,” Butler told Chron News.

The woman investigated, but she and the other riders went deeper into the woods and not wanting to get lost with her customers, Butler decided to get back to the stable, drop off the riders and return to the area with the help of an employee.

As they approached the area, Butler said the dog barked again as if to say “come help me.”

The dog was found tangled in some brushes attached to a partial leash. He was very friendly, hungry and thirsty. Rescuers took the dog to a veterinary center to scan him for a microchip and unfortunately none was found. However, the emotional reunion was made possible because KHOU-TV ran a story about the found dog a few nights later and the dog’s owner saw the segment.

Prince’s owners wish to remain anonymous. When they saw the news segment they recognized their pet and immediately contacted Butler to arrange a meeting.

“We thought he was dead,” said the dog’s owner. “It was a great reunion. I was bawling like a 2-year-old.”