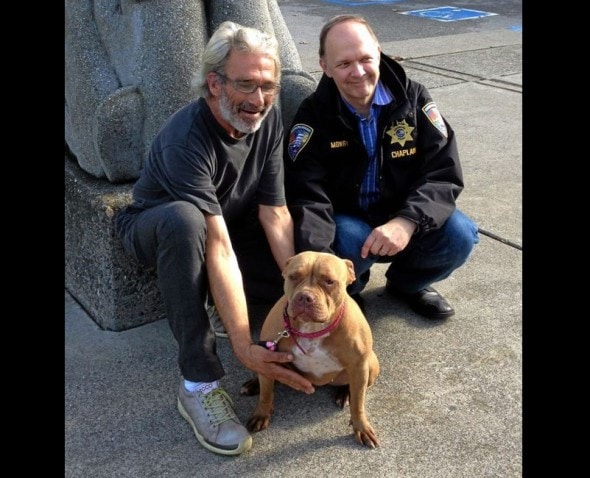 Daisy and her human, Stephen Alioto, have been reunited after a horrible storm hit Richardson Bay this past Thursday.  It sank the boat the two were living on at the time, and she didn’t immediately turn up in the aftermath.

“My neighbor told me there was a soaking wet, shivering dog crouched in the church doorway around 7:30 a.m. Thursday,” said Reverend Paul Mowry.  He is the leader of the Sausalito Presbyterian Church.   “Initially, I thought she was just a lost dog.”

Reverend Mowry thought quickly, and called animal control.  An officer was sent over to scan for a microchip.  One was found on Daisy, and the information was checked.  It turns out the chip contained two phone numbers, and both were tried.

“I tried the secondary number a couple of times and got somebody who said the dog, Daisy, had been given away to a good friend, Steve.  And we (the church) have a Steve who comes to our free lunches on Wednesday,” Mowry said.  “He lived on the boat with Daisy.”

The following day, Steve reported his dog lost to the Sausalito police.  It was the investigative expertise of Police Sargent Thomas Georges that connected the unknown dog with the distraught human.

“He (Georges) called me and said they took a report – this guy Steve reported his lost dog, a pit bull,” Reverend Mowry said.

The issue now, was how to locate Steve.  Now homeless due to the storm, it’s not like he had a valid, listed phone number to contact him by.

“My partner Joey (Silverman) said, ‘Where is the next free meal in Sausalito where he might be?'” Reverend Mowry asked.

“The Open Door Ministries does a Friday dinner.  So I went there and was talking to a man whose boat had sunk.  I asked, ‘Is Steve here?’ and the man said, ‘He’s here.  His boat sunk and his dog drowned.’

“I walked over and said to Steve, ‘We have your dog.’  He said, ‘Are you kidding me?’  I told him the dog showed up at the church.  He started sobbing and threw his arms around me,” Mowry said.

The very next day, Reverend Mowry drove Steve to the Humane Society and a man and his dog were reunited.

Big thanks to the Marin News for the quotes.