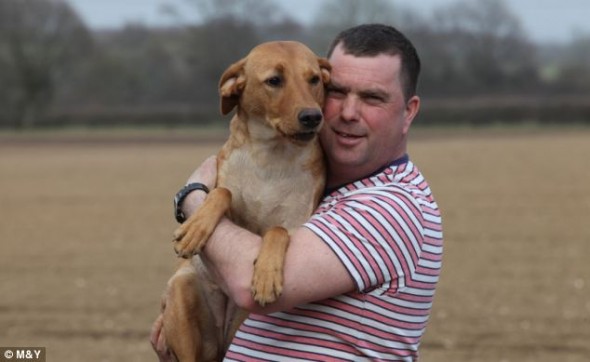 An eight-month-old lab named Fudge collapsed in pain while out on a walk. Vets couldn’t find the source of the pain until an x-ray of Fudge’s spine revealed she had swallowed a sewing needle which had become lodged in her spinal cord.

A few days before collapsing Fudge had gotten into some things in her owner Paul Manville’s bedroom. “Fudge had broken through the stair gate and demolished the bedroom,” said Manville. “She played with a couple of plastic hairbrushes and had bitten them.” Everything seemed fine with Fudge though until three days later Fudge collapsed wailing in pain. “I thought she had swallowed something and had something in her stomach so I took her to the vets,” said Manville.

An x-ray didn’t reveal anything in Fudge’s stomach. “They decided to open her up and have a look at it anyway,” recalled Manville. “But they still didn’t find anything and her agony remained a mystery.” The next day when Fudge was brought back to the vet still in pain an x-ray was done of her head and neck and it revealed that a needle was lodged in Fudge’s joint of her spine and skull. 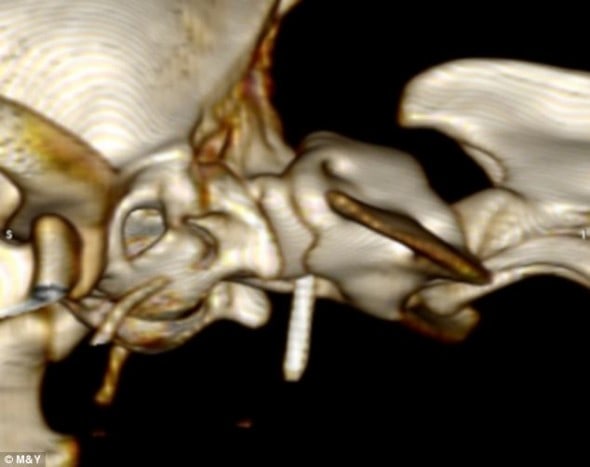 To have the needle removed Manville drove Fudge 90 miles to the Royal Veterinary College in Hetfordshire. He spent £4,500 pounds on the delicate operation. “You don’t expected to see a dog with a needle in their spinal cord so we were very shocked,” said Colin Driver, who operated on Fudge. “WE had to be extremely careful not to move the spinal cord when we removed the needle, as like in humans it is connected to all the nerve endings and could leave permanent damage.”

Remarkably Fudge surprised everyone with her recovery and was up and walking around with no problems the next day. Fudge is back to her old self with no serious injury from the scary incident.