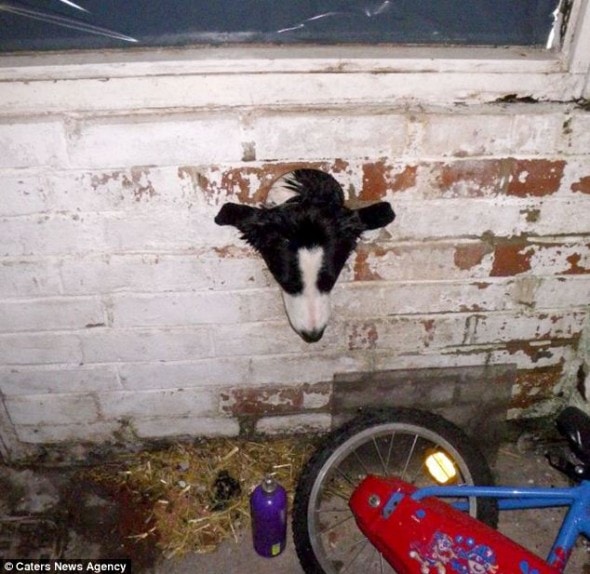 A curious border collie needed some assistance from firefighters when he wedged his head through a wall and got it stuck in an air vent in his home.

Sharon Hourihan let her 8-month-old border collie named Jasper out to play in the yard and when she went to call him back in he didn’t come. “I called him, and thought it was strange when he didn’t come straight away,” said Hourihan. “We have only had him a few weeks, but he doesn’t really go far from my side.” Hourihan went looking for Jasper and found his head poking out of a wall. “He was bright eyed, and wasn’t in any distress, and my first instinct was to laugh at him as he just looked so ridiculous.”

Hourihan soon realized that Jasper was in trouble when she couldn’t free him. “I tried covering him in shampoo, in the hope we could slide his neck out, but nothing worked,” said Hourihan. After an hour of trying to help Jasper on her own, Hourihan called the RSPCA for help. They in turn called the local vets. “The vets couldn’t get him out either – so it was time to call for the fire brigade,” said Hourihan.

Vet Tim Foster sedated Jasper so he wouldn’t injure himself while crews worked to free him. “Jasper was getting distressed by his situation and was putting up a fight so he needed to be sedated,” said Hourihan. “After he was sedated he was snoring!” With Jasper sedated firefighters were able to successfully free him by cutting the wall and making a hole big enough to free him.

Once successfully rescued Jasper was checked over by a vet and found to be healthy and fine. Jasper is still curious and Hourihan is making sure to keep a closer eye on him. “You’d think he would have learned his lesson, but I do have to keep an eye on him,” she said. “His favorite place to go and play now is the hole in the wall left by the fire service!”