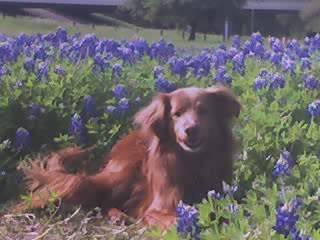 A 15 year-old Nova Scotia duck-tolling retriever named Romeo survived 66 days in the wild when thanks to a microchip he was reunited with his owner Mike Stotts.

On August 14th, Stotts was camping with Romeo in Hyde Memorial State Park in New Mexico, when in the middle of the night Romeo escaped through tent flap. Stotts awoke to find Romeo missing and immediately began searching for his dog that he had adopted from a shelter in 1997.

Stotts searched the trails of the park and put up signs in nearby neighborhoods offering a reward. He told anyone he came across about Romeo and other campers helped him search. There was no sign of Romeo anywhere. Hope of finding Romeo was dwindling as park rangers and campers told Stotts that there was no way his 15-year-old dog could survive in the August heat without food or water. Another major concern was coyotes, “Everybody told me that coyotes were a real problem out there. There were stories about them going after Lab-sized dogs on leashes. A little 33-pound dog wouldn’t have a chance.”

Stotts still searched for days on the trails of Hyde Memorial State Park. He finally fashionined a cross out of two branches in honor of Romeo and headed home for San Antonio, Texas. When he returned home he thought about adopting a new dog from a shelter, “Unfortunately, every time I went there and looked at them, the just weren’t Romeo,” he said.

Early on Monday morning Eli Madrid was driving to work when he spotted a dog. “This little dog caught my headlights, so I stopped,” Madrid said. “This one looked like it needed my help.” Madrid got out of the car and approached the dog finding him tired, hurt and hungry. Romeo was still wearing a collar with a tag indicating he had been chipped. Madrid took the dog to the vet to be checked out and see if his chip was active. Romeo had lost a third of his body weight, had developed anemia and one of his ears was ripped. The good news was his chip was active.

Stotts received a phone call on Monday morning from the dog-chipping company that implanted Romeo’s chip. They let him know the good news that Romeo was alive, “I couldn’t believe it,” Stotts said. He arrived in New Mexico to reunite with his dog on Tuesday. Romeo was very happy to see Stotts again, “He was like, ‘Where were you? Why did you leave me?’” Stotts said.