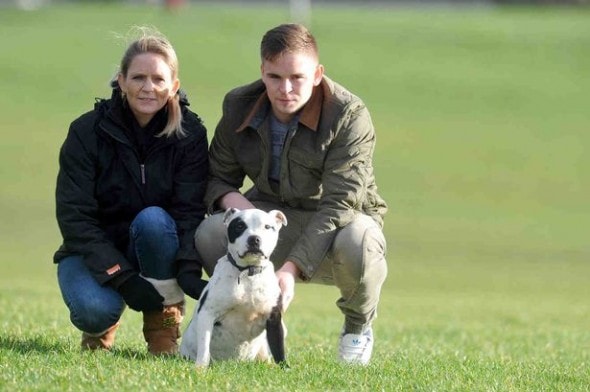 Sion Cox was only eleven when his dog Chance went missing. Cox never gave up hope of seeing his best friend again and now ten years later the two are reunited just one day before Chance was to be put down at a shelter.

Cox’s family had gotten Chance for him when Chance was just a puppy. In May of 2004 when Chance was three-years-old Cox’s mom let Chance out into the yard. When she went to let him back in he was gone. The family did everything they could think of to try to find him, but there was no sign of him.

“We knocked on doors, looked everywhere and advertised it on the internet, put adverts in the local papers,” said Sion’s mom Julie Coombes. “We did hundreds of leaflets and we never heard a thing.”

Now almost ten years later Coombes received a surprising letter from a kennel in Newport, Wales. The letter stated that the kennel had found one of her dogs. At first she thought they had mistakenly meant one of her current dogs, but they were both safely at home. When she called, the kennel informed her they had Chance and his microchip had led them to her.

“Sion walked in just as I was saying ‘Really? You’ve got Chance? It was so emotional,” said Coombes. “They told us that night he was in a bad way.”

The family went immediately that night to see Chance. The kennel was planning to put Chance down on Friday due to his failing health and old age, but once Cox saw his old friend again he knew he couldn’t let that happen.

Chance was in poor health after living as a stray. Veterinarians believe he survived on a diet of stones and bones for years. He is malnourished, deaf, partially blind, and his back legs are in bad condition. Despite his failing health Cox wanted Chance to come home and be spoiled for what time he does have left. The next morning they went back and brought him home.

“I just want to keep him going as long as possible now,” said Cox. “If that’s six months, ten months or two years I want to give him the best life possible.”