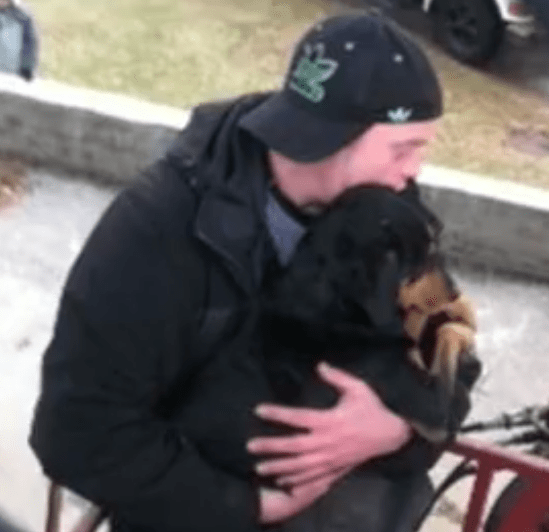 A puppy was stuck on a busy overpass in Baltimore when some commuters pulled over and then flagged down a bucket truck to help rescue him.

Tiffany Nicolette was driving her usual commute on Thursday morning when she spotted the puppy out of the corner of her eye. It was behind a fence on the 395 overpass. Nicolette didn’t know how the puppy got there but she knew it didn’t belong there. She pulled her car over and called for help.

Nicolette couldn’t reach the puppy as he was on the other side of the fence and she was afraid as he was close to falling off the edge to the other road that was 30 feet below.

“It was scary just because if you make the wrong move and startle him, he could go off the edge,” said Nicolette.

She and some others waited for help to arrive when they spotted a bucket truck. They flagged down the truck and asked for help in reaching the puppy. Bill Muncy, part of the crew with Arundel Signs, got in the bucket to rescue the puppy.

“It hopped in my arms when I put my arm up,” said Muncy. I had to catch it so it wouldn’t fall down. I was scared I was going to drop it.”

Muncy held on tight to the puppy and his rescue efforts were captured on a cell phone video. Once safe the puppy was taken to Baltimore Animal Rescue and Care Shelter. He will be put up for adoption soon.