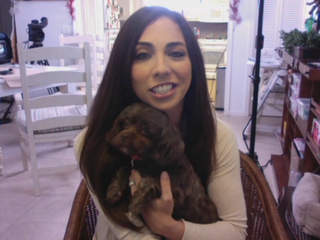 Over five years ago Jessica Namath, daughter of  football legend Joe Namath, lost her dog Tula. Last week she was shocked when she got a phone call that Tula had been found.

Michael Cecere was running errands in St. Petersburg, Florida last week when saw a dog run out into traffic. Being an animal lover Cecere stopped and got out to help the little brown Shih Tzu.

“When I approached the dog, it literally cowered and went from the running position to kind of laying, prone position,” said Cecere.

Once he rescued the dog from traffic Cecere took her to Parkview Animal Hospital where a scan revealed she had a microchip. Jessica Namath’s information came up, but after trying the phone numbers listed with the microchip Cecere was unable to contact Namath.

Cecere didn’t give up. Instead he went on Facebook to see if he could find her contact information.

“When I typed in her name on the search on Facebook, a business came up and it said Jessica Namath Photography,” said Cecere.

“I said I’ve got a weird question for you,” recalls Cecere. “Are you missing a dog?”

Jessica was shocked when Cecere asked her the question. It had been five years since she had last seen Tula. The two were soon reunited.

“When it saw her, there was recognition there,” said Cecere. “I saw that dog smile and saw the dog pant for the first time which to me illustrated excitement.”

Namath is thrilled to have Tula home finally and after all this time Tula seems to be just as thrilled to be home again.

“She’s doing great, she’s loving life and falling back into her old ways,” said Namath. “She’s just falling right back into being a member of the family again.”

2 thoughts on “Dog Missing for Five Years Reunited with Owner”