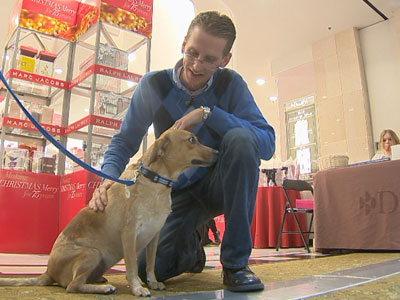 Jason Baggett was honored Saturday morning for saving the life of his neighbor’s dog.

A few weeks ago, Baggett was at home when he heard a dog wailing from his neighbor’s yard. He went to check on it and found his neighbor’s dogs struggling. At first it looked like the two dogs were fighting, but Baggett realized that one of the dogs had somehow gotten his tooth stuck on the other dog named Addison’s collar and was choking her.

Baggett quickly jumped over his neighbor’s fence and freed the dog from Addison’s collar. There was blood everywhere from the dog’s tooth, but the more pressing concern was Addison. She had passed out from the choking and without hesitation Baggett began performing CPR on her.

“If the dog’s not breathing and her tongue’s hanging out of her mouth we can’t really go downhill from here so it’s worth trying,” said Baggett. “I would hope someone would attempt to do that for my dogs too.”

Baggett’s efforts paid off and Addison was resuscitated. The SPCA of Tennessee recognized Baggett’s efforts on Saturday with a certificate of heroism. Addison and her owner were there for the presentation.