A pit bull named Gotti is on the road to recovery after being dragged for several blocks in Buffalo, NY over the weekend.  The pained pup has road rash, leg injuries and his pads have been all but scraped off.  Daniel Delaney, the dog’s owner, tearfully told police that he forgot Gotti was tied to the back of his SUV when he drove away from a store.

“We’re told he was highly remorseful, but as the owner, it was his responsibility to remember his dog. It doesn’t help the dog that he forgot,” explained Barbara Carr, executive director of the SPCA Serving Erie County.  “The dog’s paws were pretty badly damaged.  It’s going to take a long time for the pads on the paws to grow back; weeks, if not months.”

Around 11 am Saturday, a person saw Gotti cabled to the back of Delaney’s departing vehicle.

“K-9 Officer Bud Rodriguez happened to be on patrol in the area and was flagged down by the witness,” Central District Police Chief Brian K. Patterson said.  “Rodriguez then pulled the SUV over on the first block of Arkansas Street and called in district officers.”

Officers William Drabik and Patrick Murtha assisted Rodriguez in arresting Delaney on the charge of aggravated animal cruelty.  Delaney is licking his own wounds as he remains in custody at the Erie County Holding Center until Thursday, when he is next scheduled to appear in court. 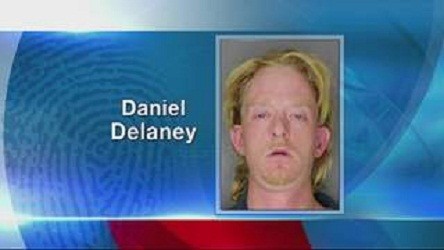 Police say Delaney seemed repentant, but it will be up to a judge for Gotti to be returned to him.  Medical expenses may cost thousands of dollars, and Carr said the SPCA is looking to obtain a bond to make sure Delaney pays for his dog’s treatment.  If he does not post the bond, he may lose custody.

“On Monday for several hours, we had a veterinarian and two veterinarian technicians working on the dog, and it appeared he would not need surgery, though one foot is particularly swollen,” Carr said.  “We also had our chief animal cruelty investigator taking photographs of the injuries.”

Gotti has been a fighter throughout his ordeal.  He is wearing special bandages on his paws that will help promote the regeneration of his pads.  He is already lifting himself up and trying to stand on his own four feet again.