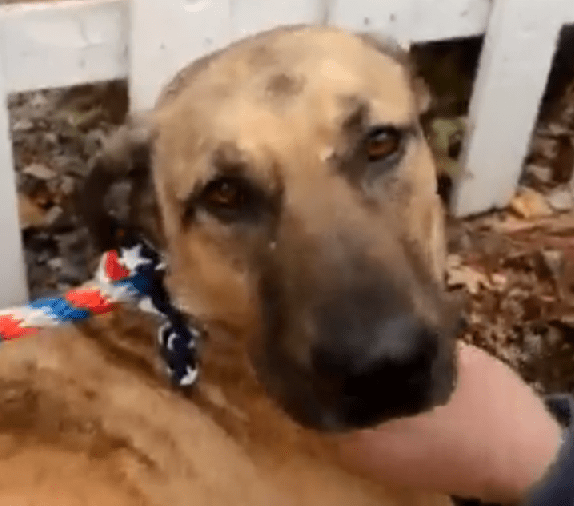 Jack is now in a safer place. The 18-month-old shepherd mix spent the beginning of his life in war-torn Iraq.  Jack endured horrible abuse until he was found by a U.S. Marine. Now he is safe in the U.S. after Puppy Rescue Mission came to his aid.

Jack had a rough start in life in Iraq. He had been beaten, shot and lost one of his legs. According to Robin Foshini, a volunteer with Puppy Rescue Mission and Jack’s new foster mom, “They beat him again to try to kill him, and he beat the odds and survived.”

Then a U.S. Marine came to his rescue and brought him to an animal shelter in Kuwait where he got the medical attention he so desperately needed. The Puppy Rescue Mission then arranged for Jack to flown to the United States. His flight to the United States arrived at JFK Airport on Saturday night. Puppy Rescue Mission raised the funds for Jack’s flight.

Jack now is being pampered by Foschini as she fosters him and helps him get ready for adoption. He still has some emotional scars to heal before he will be ready for adoption. “He’s shell-shocked. He’s been through hell,” said Foschini. “He’s got the worst post-traumatic stress I’ve ever seen. He’s shaking. He’s just terrified.”

Puppy Rescue Mission has saved in total 400 dogs and cats from war zones since the group was founded in 2010. There primary mission is to help bring home the animals that U.S. soldiers befriend serving overseas. Once brought back to the states Puppy Rescue Mission prioritizes adopting the dogs out to the service members who rescued them or other soldiers and their families.

For Jack it might be a while before he’s paired with his forever family. “It’s a work in progress,” said Foschini. “We hope he learns to trust me. He needs stability and love. It’s going to be one day at a time.”

For more information on Puppy Rescue Mission visit their website.