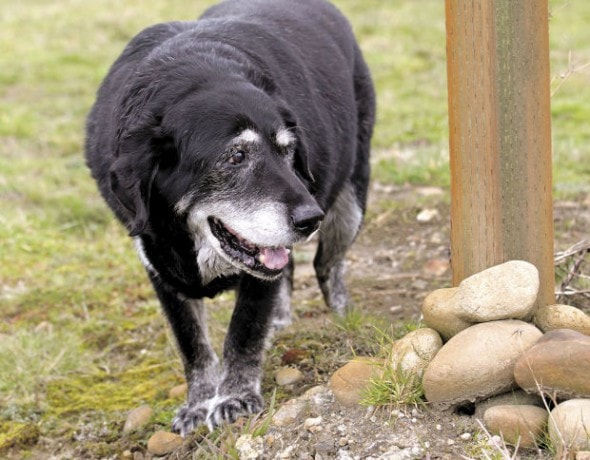 Bear Dog is well known around the community of Castle Rock, Washington. The 18-year-old black lab is so beloved that he not only is allowed to break the “no pets allowed” rule at several areas around town they even write the exception into the signs.

Signs at the North County Recreation Sports Complex read, “No pets allowed inside baseball complex or on soccer fields, except Bear Dog.” Bear Dog was there when the complex was built and has become its unofficial mascot. Mayor Paul Helenberg recalled when construction began on the complex 10 years ago, “He was just one of the guys who helped build it.”

Although some other dog owners might not understand why one dog gets special treatment, for others in the town it makes perfect sense. Bear Dog has become a fixture at the town’s riverfront. He greets visitors, loves to go fishing with the fishermen and walks kids home from school and most of all he loves going to ball games.

Bear Dog would spend all day at the ball fields when tournaments went on. Bear Dog was such a regular at the fields, his owner Don Caulfield could set his watch by the time Bear Dog would depart for the ball games at 4 pm and return home at 7:05 pm. Every night when Janice Vinton, who was typically the last person at the ballpark, would close the concession stand and Bear Dog would be waiting to walk her to her car. “Bear’s special to everybody,” said Vinton.

Now at the age of 18 Bear Dog has arthritis, is losing his hearing, has congestive heart failure and last year he had a heart attack while running across a field. Caulfield tries to keep Bear Dog home the best he can and not let him venture to the ball fields anymore. “I can tell him he can’t go, and I catch him sneaking out,” said Caulfield.

Bear’s age is an amazing feat for a larger dog. There have been times when Caulfield has thought it’s time to let him go, but he hasn’t been able to part with his dear friend yet. “Every time I think it’s time, he bounces back somehow,” Caulfield said. “I don’t know how he does it.”