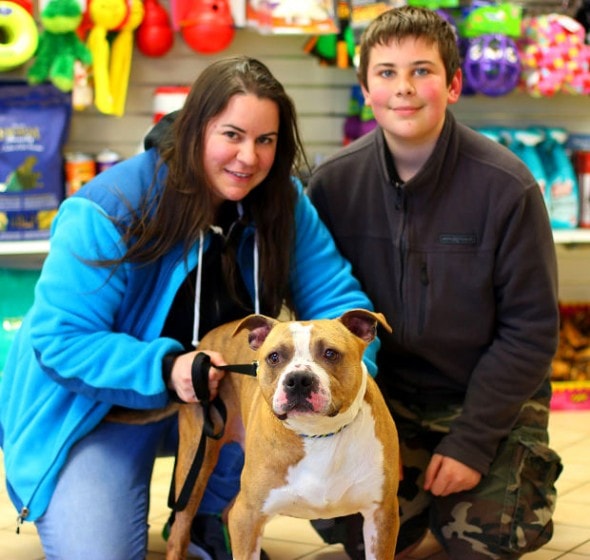 There were not many signs of life being given off by what Tommy Sharrett called “the thinnest dog” he had seen in his life.  However, just to be sure, he decided to toss a treat towards the dog, and when it landed, Tommy got one heck of a surprise.  Leaving Tommy flabbergasted, the malnourished dog slowly made it to his feet, and ambled over to where the treat was and ate it.

Sharrett is a community officer, responding to animal calls with the Racine, Wisconsin Police Department.  He was able to help the dog gain confidence, and brought him to the Wisconsin Humane Society, in the hope that they could do something to help this poor sickly dog.

That was all back on March the 20th.  Now, nearing the end of April, the dog has been well taken care of, nursed back to health, and on Tuesday was adopted by a Mount Pleasant woman, and her son.

Elizabeth Henderson is his new mom at his forever home, and she says he is doing nicely, and adapting quite well.

“He’s doing amazing[ly],” said Henderson. “He loves to be outside. He enjoys going for walks. He had his first bath (Thursday).”

She and her son had been looking to get a dog because, “a house is a home when there’s an animal living in it,” says Henderson.  Instead of shopping, they decided adoption was the best way to go.  They went to the Wisconsin Humane Society to look at a different dog all together.  However, once they saw the two-year-old American pit bull terrier mix, who was once mistaken for dead, they instantly fell in love.

“He leans into you. He wants to be scratched and petted,” Henderson said. “He’s just really a big lover, a big teddy bear.”

The dog’s new name is Little Guy, which was given to him by the humane society, seeing as he came to them weighing a mere 36 pounds.  A normal, healthy weight for his breed is somewhere between 50 and 70 pounds.

Sharrett did say he believes, given the condition he found Little Guy in, he was living in the garage of a foreclosed home.  All he had to eat and stay alive with was the charcoal and fertilizer left behind, which mad him very, very sick.

Currently, Little Guy weighs about 55 pounds, and is on a much healthier and nutritious diet these days.

“He’s been through who knows how much,” said Henderson. “The officer did a great thing making sure the dog was active and alert before he made any kind of decision about it. I’m glad they took the time and the care to bring the dog in.”