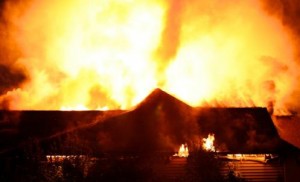 Greenville, SC — Firefighters say they witnessed a miracle after losing the battle to save a home from fire, only to find a survivor huddling in the charred remains six hours later.

Despite the best efforts of thirty firefighters from four departments, the Brumby family home was lost after a violent blaze burned it to the ground. Heat and smoke in the structure were far too widespread for internal access, so it took two nearly hours to get the fire under control, and another few hours just to put out hot spots. A total of six hours had passed when firefighters happened upon the unexpected – a drenched, dazed, soot covered miracle named Mia.

As fire consumed the home around her, 1-year-old Belgian Malinois Mia did the unthinkable – she saved herself. The trapped dog made her way through the home by opening four doors, eventually finding her way to the basement, seeking safety in a bath tub that had filled with water as firefighters doused the flames that threatened her very life.

Mia’s owner, Chris Brumby, said he was amazed that she survived, but was not surprised by her actions. He said the dog had previously learned to open doors throughout the house. As firefighters carried her out of the home, “She literally had steam coming off of her,” he said.

Brumby, his wife and their children were dining at a local restaurant when the fire started. And while the house was a total loss the family was incredibly relieved that their dog survived. “That was a pretty special moment for us, because she’s definitely part of the family,” he said.